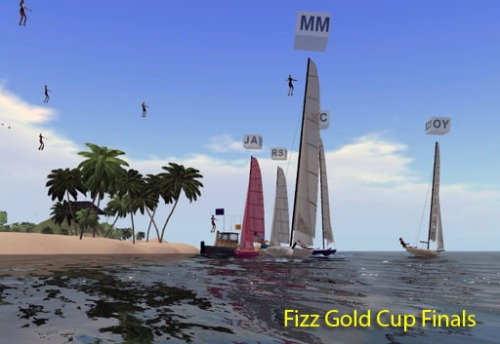 The World Fizz Cup 2009 came to a close this past weekend with Sunday morning’s Gold Cup Regatta.  It was the culmination of eight weeks of hard sailing; over that long haul five sailors rose to the top of the qualifying fleet, distinguishing themselves with a truly remarkable show of tenacity and skill, and earning a spot in the Gold Cup Finals.

The top five sailors were: Miwha Marsala, Kie Cioc, Odysseus Yiyuan, reia Setsuko, and joro Aya. On Saturday Tim Warrhol took the Silver Cup; that gave him the ticket for the sixth spot to round out the Gold cup fleet.

Sunday morning’s final contest in Turnbuckle turned out to be a test of the sailor’s skill and force of will. The six races were all in expert mode, and the course conditions were designed to enhance the difficulty. Although the seasoned sailors were up for the challenge, severe lag plagued the regatta and technical issues kept several contenders from showing their true ability under the pressure of this ultimate competition. 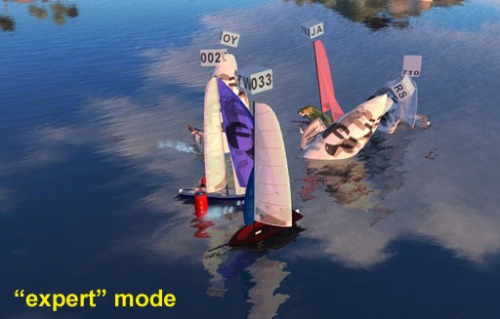 Having said that, however, it’s also true that every sailor knows that race conditions are like poker. You play the hand you’re dealt, and you can’t complain about the cards you get. 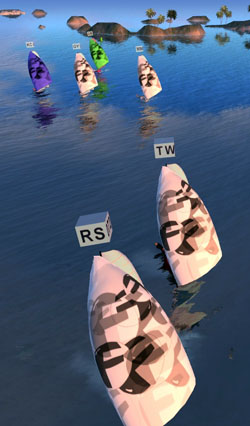 All six finalists were outstanding sailors, but on Sunday morning Kei Cioc had all the right stuff. He sailed a conservative stategy, avoided pileups and, while boats capsized around him, he watched for an opening in the pack, a shot that would give him clean air and let him step on the gas. He was unflappable in race after race, sailing with all the focus and skill he’d perfected over so many regattas this past year. It was no surprise: Kei placed #2 in Fizz Cup 2008, and since then he’s pretty much won regattas in every single one design division of SL Racing. Kei had nothing to prove Sunday.

Well, ok, maybe he had one humorous thing to prove… He’s “Kei, not ‘Key.'”  But any sailor in the fleet already knew that.

So on Sunday he showed us all how it’s done. With confidence and a steady hand on the tiller, he lead the way. The Fizz Gold had Kei’s name on it this year. But in case you missed it, please don’t take my comments to imply his win was easy. The six races were hard fought, and the “point spread” remained remarkably narrow until the last races. Tim Warrhol and Reia Setsuko stayed within striking distance of Kei to the end.

Surfwidow Beaumont caught the highlights in one of her best sailing videos ever. Go see it here: http://surfwidowsweb.blogspot.com/ .

Watching from onhigh in real time, however, viewers like myself were drawn to Kei’s command and determination over the course. It was hard not to think this was his race to win. It was a joy watching him do it, as he inched his way past all his friends in the competion.

Mid-way through the race series, when the points were way-too-close to call, Liv Leigh was standing next to me, wondering if it was even possible to stop Kei’s march toward the Cup on Sunday…

We knew that’s wasn’t in the cards, though; Kei had the ‘magic’ (and after all, Bea had already arranged for the Tokyo Parade, and Japan had announced National Kei Day… 🙂 .

Whether he knew this or not, Kei sailed the final races like the champion he is, and he took the Gold Cup with all the grace, charm, and authority he’s shown throughout this past year.

Kei Cioc now stands as an icon; he’s raised the bar to a new level. Kei has won more major regattas –across all boat classes— than any other SL Sailor, EVER. That lofty accolade could not go to a more wonderful, or more dedicated person.

Sailors like to disagree about tactics, strategy, boats… but I’m pretty sure that ‘Kei’ is one issue on which we all agree. I’ve been involved in SL Sailboat races for two and a half years now… but I admit I’ve never seen anything to match the explosive shout and sustained applause that burst from the huge Hollywood Bowl crowd on Sunday when Kei Cioc was handed the 2009 Gold Cup. Well deserved and well sailed!

This entry was posted in Fizz, Fizz Cup 2009, Racing. Bookmark the permalink.