Since the J-Classic Regatta Series is warming up, I went hunting through old files and spreadsheets I have on  J-Class, trying to see if I had any performance data that I hadn’t gotten around to post yet. 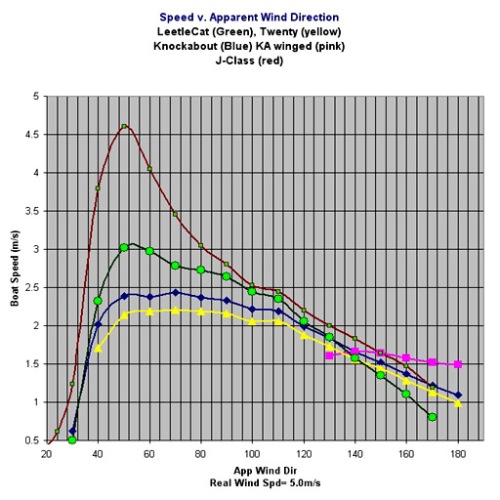 The image above is fairly old, but I think it’s still accurate. The chart that compares the performance of the J-Class without a spinnaker to the Trudeau Twenty, the Knockabout, and the Leetlecat. When wind= 5.0m/s, you can see the major difference between the boats occurs predominantly on upwind performance. Using just main and jib over 100° apparent, all four boats are pretty similar.

I also threw in the knockabout performance data with winged sails over 130° (shown in pink). Winging the sails enhances performance over 140 degrees in knockabout and T20. There is no performance boost in the J-Class, however. (C’mon… that’s why you have a spinnaker).

Here is another, fairly similar example of performance With different sails.
The blue line in the above chart shows the Speed Over Ground for the J-Class Using the EZ-HUD that comes with the boat. That’s a quick way to get the ‘manufacturer’s recommended’ sail settings. I then plotted the boat speed at different angles using  just the mainsail or just the spinnaker. Those results are shown in green and red above.
The chart showsthat with 5.0 m/s wind, the spinnaker becomes effective with apprent wind angle >90°, and the spinnaker boost effect is rather substantial over a broad downwind range, falling off quickly over 170. 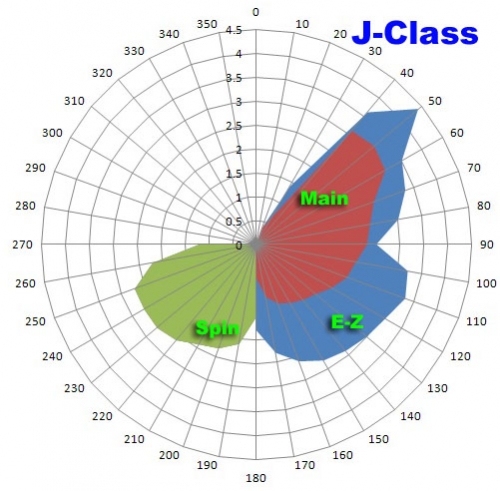 The image above is a polar plot showing similar data for the EZ-HUD, mainsail, and spinnaker. The shape of the spinnaker curve is a close match for the RL parachute.

The next chart (shown above) shows a similar graph, but in this case 11.0 m/s  wind is compared with 5.0 m/s. With both wind speeds, there is a big jump in performance (i.e., boat speed) when the boat fall off to 40° apparent.

This graph also shows the benefits of reefing. The green line shows Speed Over Ground at 11 m/s without reefing, and the blue line adds the reef point. There is a rather explosive increase in speed when the mainsail is reefed while heading windward between 30-60° apparent, and around 40 degrees the reef will more than double boat speed.

Don’t count on it too much, however. Under these conditions, at 60° apparent or greater, there is little, if any noticeable benefit.

The above chart shows the same data in a radial plot, this time with the “reefing boost” indicated in pink.

This next chart was an attempt to show the correct apparent wind intensity for the reefing effect. The boat heading was held constant at 40 degrees apparent, and the boat wind was gradually increased. Apparent wind readings were then correlated with boat speed under reefed and unreefed conditions.

At low-wind intensities, the boat responds best to unreefed sails (as shown in the blue curve above). That effect plateaus over approximately 11 m/s apparent. However, the curve for reefed sails continues to sharply rise along with wind intensity, and the crossover point (point where reefing starts to boost speed) is around 11 m/s (at least for the single heading of 40).

Here is a final bar graph showing the effect of hiking with a single crew member. On a fixed heading of 40 apparent with Real Wind= 5.0 m/s, there is roughly a 15% speed difference when the crewperson shifts from the leeward rail to windward. I don’t have the numbers for a full crew yet! 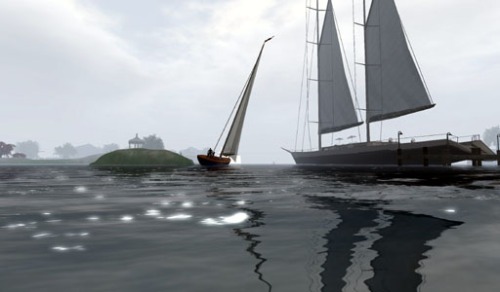 This entry was posted in Department of Public Works, Trudeau Yachts, Uncategorized. Bookmark the permalink.