A few weeks ago Trudeau Classic Yachts launched the much-anticipated Columbia,  Jacqueline Trudeau’s remarkable recreation of the legendary 1899/ 1901 America’s Cup racer. Columbia will replace JT’s venerable Defender in the TCY fleet line-up. This seems a remarkably apt swap, since Columbia also replaced Defender in Real Life over a century ago! 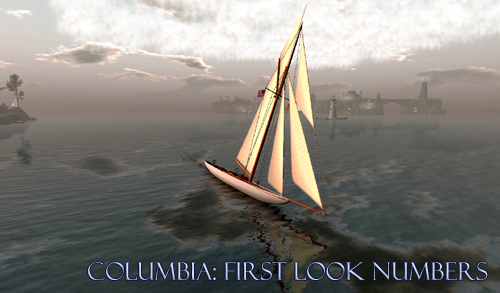 The new Columbia is the largest and most complex vessel in the Trudeau line, combining cruising style, live-aboard comforts, and steely-eyed race features.  Columbia even comes with a tender/ lifeboat that is a true thrill to sail in it’s own right. There are so many issues and features I can’t give you an easy assessment of this latest Trudeau yet; I’m still getting acquainted with it. Nonetheless, I just couldn’t resist the impulse to share a few Columbia performance numbers as I’m settling in, and trying it out! 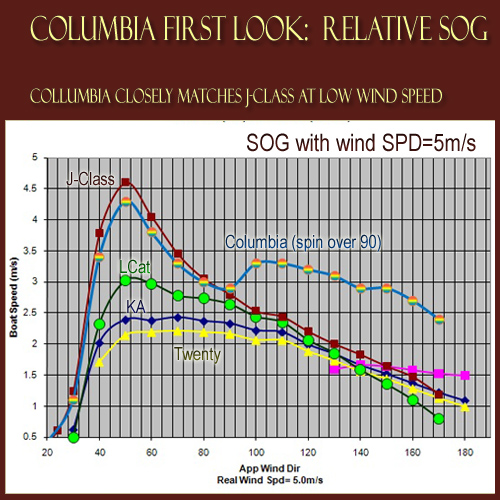 Regular readers of this column (all six of you) will probably recognize the above chart;  I’ve posted many versions of it before. It plots the steady-state boatspeed (“Speed Over Ground,” or SOG)  against different apparent wind angles using a fixed real wind velocity of 5.0 m/s.   Each curve shows the relative performance of a recent boat from the Trudeau fleet; the SOG for Trudeau Twenty is shown in yellow, Knockabout is in dark blue, Leetle Cat  in green, and J-Class is shown in red. I’ve now updated the chart to include Columbia’s performance, which is shown in light blue.

If you look carefully, you will see that Columbia’s SOG on upwind points of sail look  nearly identical to J-Class;   the light blue and red curves nearly overlap between wind angles of 20°- 90°.  The sharp initial slopes for each boat (under the 5.0 m/s wind conditions) reveals that both J-Class and Columbia generate a rather explosive increase in lift-thrust as the boats’ heading falls out of irons into close haul. Under light wind conditions there is easily a fourfold rise in SOG as the bow moves from 30° to 40° apparent and the sails fill.

The sharp, early SOG peak on the above curves for Columbia and J-Class indicate that both boats probably have an optimal “velocity made good”  at a heading of 40°-50° apparent under light wind conditions. However, any sailor will tell you that optimum RL boat performance changes with increasing wind intensity. The curves in the above chart were all plotted using very light wind (5.0m/s), and can be misleading under more typical race wind conditions. 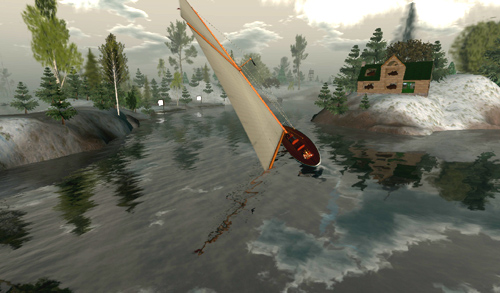 In real life (and in current TCY boats) as a sailboat accelerates upwind, the apparent wind velocity increases and the apparent wind direction swings toward the bow. The boat heels in response, and the sails become less efficient. In several Trudeau boats, the crew can set  optional ‘reef points’ to compensate for such strong-wind heel effects, with resulting enhanced performance upwind.

The chart below shows a polar plot of the J-Class ‘reefing effect’  (in pink), with real wind= 11.0 m/sec. You can see there’s a huge speed boost that’s largely confined to headings from 30° to 60°. 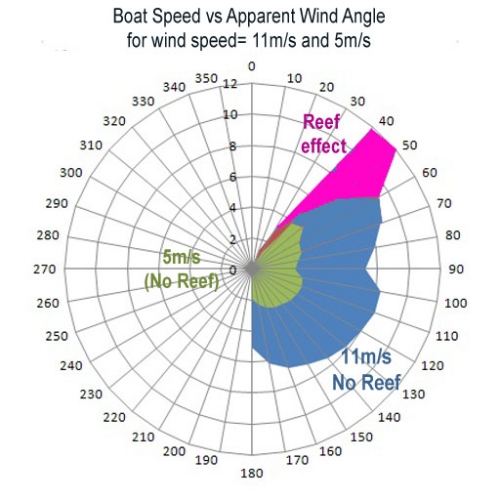 Columbia has two reef points that also greatly enhance upwind performance under strong wind conditions. The chart below plots this effect on Columbia’s optimum boat speed for the three reef positions, given a real wind velocity of 11.0 m/s. 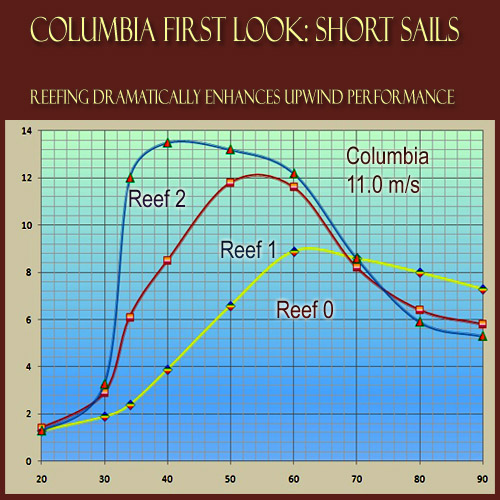 The yellow curve shows the boatspeed without reefing, and the maximum upwind SOG occurs at approximately 60° apparent. Reefing the sails not only increases boatspeed; it also lets the boat sail higher into the wind. Using optimal sail settings with real wind = 11.0 m/ sec., Columbia’s SOG at 34° using Reef Two is FIVE TIMES as fast as Reef Zero. Wowzers!

Reefing allows racers in SL to set a much higher heading for their optimal “Velocity Made Good” on a beat. I’m still collecting numbers, but my guess is that Columbia should have a target VMG around 34° apparent when sailing into a real wind of 11.0 m/sec…  but I have many more laps to do before I’m comfortable with that number! 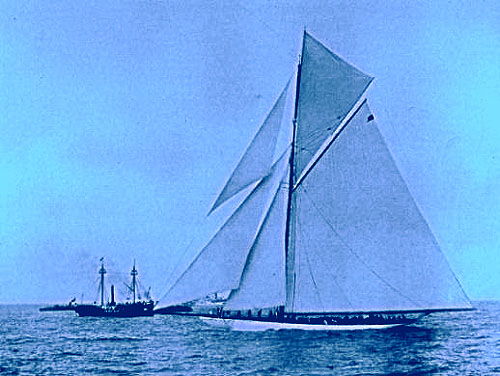 This entry was posted in Columbia, Trudeau Yachts. Bookmark the permalink.