Becca Moulliez: “I dont think the Tako will ever end..”

The America’s Cup in SL had just ended a week before, the real life America’s Cup was won and lost yesterday. It was time for smaller boats, for something that we ordinary people could actually have fun with. Monday February 17th 2010 was a perfect day to present a new sailing engine for aspiring boat builders. Liv Leigh set out to interview it’s proud maker: Becca Mouliez. A talk with a Second Life workaholic who spends most of her time with her ‘baby’.

Liv Leigh: Becca, you are one of the newer boat builders in SL. And as such I may say, one of the rising stars. How would you regard yourself? A Sailboat builder or a scripter?
Becca Moulliez: I regard myself as a scripter. I’m not that good as a builder.

Liv Leigh: I remember when I first met you, you were rebuilding a tako from scratch, is that the kind of thing I should consider a sign of your ambition as scripter in the sailing community?

Becca Moulliez: Well… to tell the mere truth I was curious about exploring SL using a boat. I built a small powerboat first and then a Sailboat… but I could not find any good sailboat script around.Then I found those Tako 2.1 scripts in SL Wiki and found it logical to clone a boat similar to the Tako.

Liv Leigh: So you just wanted to make your own boat, to use it..

Becca Moulliez: Thats right. I had tremendous Lag problems at the time, since my laptop had poor graphics. I got a Tetra that was really beautiful… but could not afford sailing it well…
Too much load due to the attachment.
Liv Leigh: When did you first start to think about scripting your own sailing engine?
Becca Moulliez: As soon as I realized I could not sail a Tetra.
I knew the Tetra was a Tako.
Liv Leigh: And I guess you figured out pretty soon that the tako scripts were getting a bit old..
Becca Moulliez: Well I realized that they had a few bugs and I wasn’t satisfied with the load on SL. Plus most boats arounds had many more features
So I bought a Fizz 2.
And realized that there were many more features available… But once again due to my poor configuration even the Fizz was laggy.

Liv Leigh: I understand. The Fizz 2.0 used to be one of my all-time favourite boats, it could get quite heavy though, also for me.Your first boat, that you actually brought to the public, was Becky’s Baby Sloop, a small boat that got very popular within no-time. What were the ideas that brough you to creating this boat and why did you decide to release it for free?
Becca Moulliez: Well the boat I would like to release at the time was the Laser actually… but I wasn’t ready due to the tight Boat Show schedule.
So that Sloop was ready 🙂

I released it for free because I want the sailing community to have a working platform for builders.
I could not find something comparable when I started scripting.
Liv Leigh: You think there used to be a big gap between the proprietary sailing engines of the big builders and the free scripts, like the Tako 2.1?
Becca Moulliez: Absolutely YES.
Best builders have many features we still miss.
But most of them have been working on their scripts for long… Hopefully we will reach a close-to level soon…

Liv Leigh: At some point in 2009 Mothgirl Dibou’s boat building kit, based on the Fizz scripts, was released. Have you considered to use that as a base?
Becca Moulliez: I did… and I used it ! I was really excited for a number of reasons. First Mothgirl used to build close to me at Adriatic. So, while she wasnt talking much i could see in person the Kit progressing under my eyes.

Liv Leigh: I see..
Becca Moulliez: Second: the Fizz is probably the best engine around, so I was really excited about having the opportunity to use and maybe adapt it to my own needs…
Unfortunately the Fizz Kit wasn’t an open code resource… and this came as a little desillusion actually.

Liv Leigh: I understand.. So this is how you slowly got into scripting BWind, the engine you present this monday.
Can you tell me something about BWind.?
Becca Moulliez: Well Bwind is a sailing engine meant to be as low-lag as possible. Comes from months of scripting for my own use. I stripped the Tako 2.1 scripts a lot to reduce lag.

Liv Leigh: This explains why your boats became an instant hit with the touring community…
Becca Moulliez: Well, the Sloop came as a direct request from Manul Rotaru and Tory Micheline at Mowry Bay Crusing Club. They wanted to have a low-lag cruising boat.

Liv Leigh: Great. I understand that the Schiffsratten Yacht Club has already organised a race series in one of your boats. How do you see the development of BWind when it comes to racing classes?
Becca Moulliez: Well, to race effectively we need a rewrite of current WWC Receiver… I’m not satisfied about the current one. At this point probably the BWind boats could be comparable to a Tako 3 for racing.

Liv Leigh: Few people know that you have a prototype ready with a number of other functions in it, one that I happen to posess now 😛 How would you describe that one.. Or is it classified? 😉
Becca Moulliez: I have a work in progress prototype including independent sails, a spinnaker and a wing/jib function. Plus I’m testing boat dynamics to have a more realistic feeling… And no, it’s not classified 😉 Only in alpha stage 🙂
Liv Leigh: I think there are quite some people around who see the potential of the BWind engine. There is talk about Trudeau Classic Yachts testing a BWind-powered boat, I have heard about others who contacted you for scripting boats for OSGrid. How do you see this yourself? Will we see a whole legion of new sailboat builders? Will this be ‘the end of the tako’, as some people have proclaimed before about new sailing engines? What do you think the future will look like?
Becca Moulliez: I dont think the Tako will ever end actually… the Tako is a nice simple boat and a lot of fun to race. I dont think any Boat or Builder will end actually…
Probably some will be using BWind as an alternative to their current releases. And probably we will see many new builders around… to what extent and quality level we will see…

Liv Leigh: That’s nice. I think we now know something about your work in SL. So how about play? What other things do you like in Second Life?
Becca Moulliez: Oh well 🙂 Apart from spending as much time as possible with my baby, I don’t have much time left to do many things I would like to. When I have time I still love exploring the seas of SL 🙂
On a BWind obviously 🙂

Liv Leigh: Do you sail in RL?
Becca Moulliez: I have been sailing in RL for a while on small boats… Optimist when a girl and the Lasers and 470.

Liv Leigh: Did you sail competitively? Or as recreation?
Becca Moulliez: Just recreation mostly… I had some sailing experiences on bigger boats (more or less like a Tetra) and I know a number of good RL sailors. One of them won 2 AC and 2 Louis Vuitton Cups 🙂

Liv Leigh: You mentioned exploring, is there a specific place you found that you like a lot?
Becca Moulliez: Windlass in Blake Sea 🙂 But they are more places. Once there were some wonderful sims called Nanogunk where you could sail. And there are also those Pirates Sims I like so much.

Liv Leigh: Ok, thanks for the interview. I will simply end with my usual question now: what would you advice sailors in SL? (and for you an additional one: and sailboat builders?)
Becca Moulliez: Sail Light ! drop your AO’s and scripts first and your own glamorous flexies ! I know someone who raced at 54 knots and won, wearing a cool greenish outfit ! 🙂
Liv Leigh: That sounds strange, who would that have been… 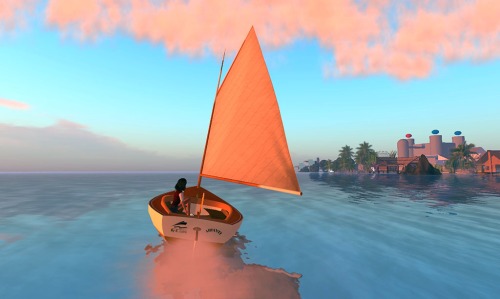 This entry was posted in Uncategorized. Bookmark the permalink.

3 responses to “Becca Moulliez: An Interview by Liv Leigh”