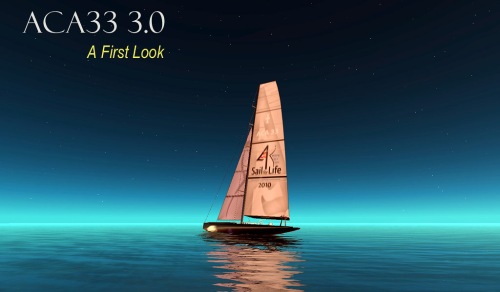 The Americas Cup competition holds a unique spot in the history of sailing. It embodies a century and a half of tradition, uncompromising excellence, and personal dedication. Although the 20th century was pockmarked by global disater and warfare, I think many would agree the AC challenge stood as a distant beacon, an iconic bright star that held the common hopes of so many sailors trying to express their common beliefs in this fragile, watery world.

I admit it, I inevitably end up thinking of the Coppola movie version of the Cup:

I know, I know the movie got the sailing all wrong and it should make any real sailor cringe, but wow, Coppola got the spirit right.

Not surprisingly, that tradition found its way into Second Life.

Please, give Florencia007 Csak a standing ovation! In Spring 2007, Florencia and 9TH.com

helped organize and sponsor the ACA-SL America’s Cup Regatta in Second Life. It was a truly wonderful event that became a defining moment for all SL Sailing, clearly demonstrating the metaverse potential — and opportunity —  for a RL-SL sailing emulation.

Surfwidow Beaumont’s video captured the true essence and the excitement of that rather glorious event:

The ACA32 Racer was the competition boat originally designed for the Americas Cup Anywhere- SL event. It was a combined, creative effort that involved several builders and scripters. Jacqueline Trudeau provided the ACA32’s sail engine, and the boat’s visible hull and hardware were part of a wearable attachment (remember, this was way before sculpties!). The boat was majestic and impressive, and immediately won the hearts of a generation of SL sailors.

However, it’s fair to say that as boat design evolved in Second Life, the ACA Racer failed to keep pace. This was a tad ironic, since in Real Life the AC boats are often considered on the cutting edge of nautical design, continuously pushing the limits of technology and construction.

Two years ago I wrote a short article humorously complaining about this, asking for an ACA fix and whining “ I want a new gun.” 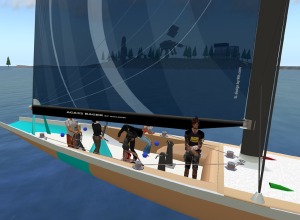 Since Christmas was approaching, I included a letter to Santa Claus, asking for a new ACA, something to push the envelope. I got pretty specific, too: I wanted a boat with Apparent Wind, Realistic Shadowing, and omg… a Spinnaker!

Well, it turned out that upgrading the ACA was no easy matter. Over time, several scripters had tinkered with it, and any major upgrade was going to take somebody smart who had a clear vision, a large commitment and a fresh approach.

Caf Binder stepped up to the plate a few months ago and took on that rather daunt-laden challenge. This past Saturday his new ACA33 3.0 officially hit the water, and sailors finally got to see what Caf’s been up to late at night. 🙂 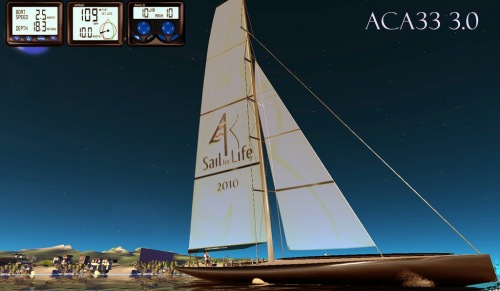 The new 3.0 has all the things I begged Santa for, and much, much more!

Quirky Torok has a pretty great introductory video that can give you a rundown of the new features on the boat and also get you going sailing if you’ve never skippered an ACA before:

I’ll try to focus my initial, brief discussion here on some background and issues not covered by Q; I’ll have a lot more to say later!

Most sailing vessels in SL are “derivative.” In other words, they are based on a prior sailing algorithm, such as Kanker Greenacre’s public Tako scripts.

I mentioned above that the original ACA32 sail engine was scripted by Trudeau, and I admit with a degree of chagrin that I’ve always thought of the ACA32 (and early versions of ACA33) as sort of a ‘buggy prototype’ for the Trudeau Larinda that launched several months later.

Well, Caf Binder didn’t go that route; he went back to square one and redid everything in the ACA, incorporating some of the best ideas from Trudeau, Mothgirl’s Fizz engine, and Caf’s own Jangars.

The result is a new sail engine; if you ask Caf what the 3.0 is based on, he grins and quickly answers “The real ACC v 5.0.” Caf’s vision is to build a boat that uncompromisingly reflects the Real Life sailing properties of recent Americas Cup monohulls. Quirky’s video above mentions a few simple examples of this penchant for reality, including such items as when you raise/ lower the spinnaker, there’s a ten second delay, and the jib can’t trim tighter than 10°.

When you sail the 3.0, you’ll find how serious Caf is about this approach. After you click the “Anchor” button on the HUD, for instance, it takes a full 60 seconds for the boat to come to a complete stop. When I asked about Caf about this, he replied “How long does it take the Real boat to stop?”  Actually, it was hard to disagree with that logic! 🙂

I have lots to say about this boat, and a lot I still haven’t yet figured out; today I’d just like to give you some basic performance plots I’m working on, and say some nice things about Neron’s spinnaker!

Since Caf’s design target was to realistically model an IACC Class boat, let’s begin by talking about those real performance characteristics. The plot below shows data for upwind Boat Speed (BS) as a function of True Wind Speed (RWS).  The numbers are for the Swedish Victory Challenge Team’s IACC racer “Orn”  and adapted from figures published in Joel Nielsen’s Master’s Thesis.

If you look closely at the above best-fit curve, you can see that under low wind conditions, Orn’s boat speed can exceed RWS; with a 6 kt breeze, the boat will do 9 kts! 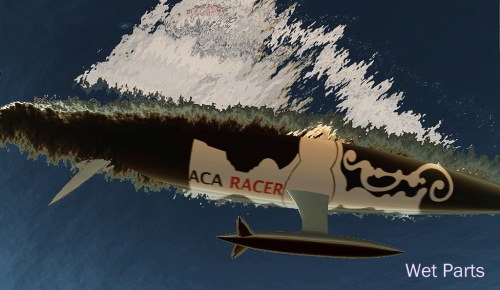 However, as wind intensity picks up, multiple factors resisting the boat’s forward motion become more prominent, and the boat is less responsive. In a 20kn breeze, Orn does around 10.4kn. My whole point here is just  to say that a RL sailing vessel has a nonlinear response to increasing wind speed.

Caf Binder’s  evidently modeled that into the new ACA33 3.0. I don’t know where Caf’s getting his numbers, but I’m impressed the boat I’m sailing comes close to the actual RL performance values for IACC. 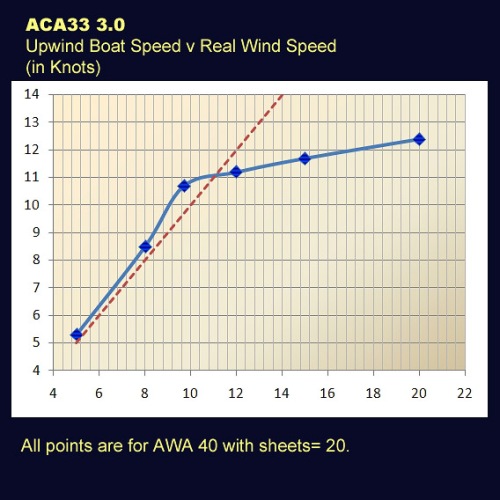 Take a look at the chart above. At low wind speeds the 3.0 matches or exceeds RWS. However, around RWS =10kn the boat becomes less responsive and at RWS= 20kn the boat speed is approximately half RWS. A pretty close match to the RL numbers!

Here’s my initial ‘polar’ for the ACA33 3.0 with RWS= 9.7kn, flying just the Main and Jib (no Spin). The 3.0 uses a “full-dose” Apparent Wind calculation, so there’s a big shift in Apparent Wind heading towards the bow as the boat accelerates. In a 9.7kn breeze, an Apparent Wind Angle of 60° actually corresponds to a Real Angle of nearly 120° !

The HUD in 3.0 has a nice feature that alternates the AWA and RWA displays, so it’s actually pretty easy to keep track of this stuff.

I mentioned the above numbers correspond fairly closely to the RL IACC racer. 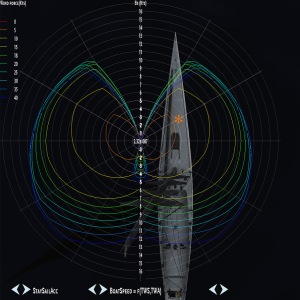 However, it’s also fun to note that 3.0’s performance matches the the published polars for the Virtual Skipper VSK5 ACC boat.

If you click on the image to the right, you’ll get an enlarged view that shows a response curve for RWS=10kn that’s pretty similar to the above results for 3.0.

I’s nice to see how closely all the versions match up!

A boat without a spinnaker is like a day without sunshine. 🙂

ACA33 3.0 has a megaprim sculptie Spinnaker and hull that are both crafted by Neron Blanco.  Since there can be “mismatches” between the visible sculptie and the underlying collision mesh that actually bumps into obstructions, one of the first things I usually do with a new boat is to go around hitting stuff in order to check out the sculptie. 🙂

Neron’s spinnaker and hull pass that silly test very nicely! As you can see below, the front and sides of the ‘chute’ bump into a test object with nearly perfect contact. There’s a small  ‘gap’ near the top of the spinnaker when it is the first touch point, but that’s really irrelevant for sailing or racing, even under truly extreme circumstances.

Since we’re talking about bumps and spinnakers, let me also comment that the spinnaker pole is low enough to hit buoys… or boats… or sailors, so be careful! 🙂

It’s actually not a trivial issue, since the spinnaker on 3.0 automatically rotates in response to the wind heading. (I’ll tell you more about that next time).

Today I just want to add the plots for the spinnaker and jib to emphasize the differences, and to give you some data so you can decide when you want to switch head sails.

The curves below show Boat Speed v Wind Angle for Spinnaker and Jib used alone, with the Main down. The spinnaker provides a big boost for AWA headings over 60°; it’s easily twice as effective as the Jib from AWA= 70° – 160°.

Having said that, please be very careful using the spinnaker below 70° Apparent. When the parachute collapses, there’s a sudden loss of power and the boat careens as the bow drags leeward.  Be afraid!! 🙂

I have a lot more to tell you about this boat… and I’m still figuring a lot of it out. I’ll fill you in next time!

But for today, let me just say

“Thank you Santa.“
And Thank you 9TH, Caf, Quirky, Neron and Flor.