Many of the Dire Strait SL-VT Matches highlighted issues with the race mark in Rachel sim. Rachel is blessed with some interesting Rule and strategy issues. 🙂

I wrote about this on Monday; several sailors replied with good comments and questions. It seemed a fun idea to continue the discussion here today. We might end up with a general consensus about how the SL Rules apply when obstructions are close to race markers. On the other hand, we might conclude the setup in Rachel is just awful, and agree to request a change from LL DPW! 🙂 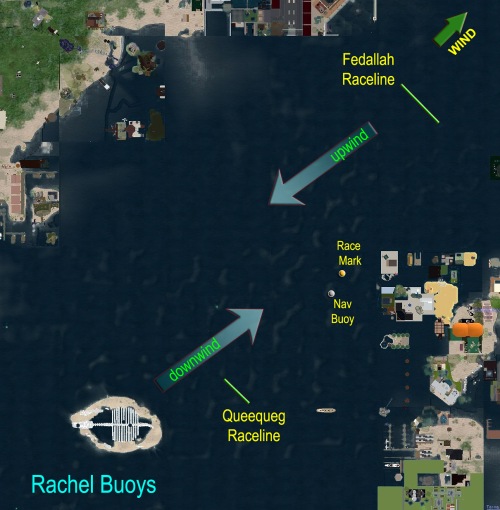 As you can see in the above map, there are Dire Strait race lines in both Fedallah and Queequeg. The Fedallah line recently got an industrial-strength workout during the final phases of the SL-VT regatta. Although GGYC used several different charts, they all followed a pretty typical Match Race, Upwind-Downwind course format as hinted above.

Racers started in Fedallah, then beat windward to clear a top mark just south of Leviathan Island  in Ahab’s Haunt. The skippers then turned their gaze for home, doing a multi-sim downwind ride back towards GGYC that usually included a pit-stop in Rachel at the orange-white race mark.

The map above shows that general layout… focusing on that last turn in Rachel and emphasizing the location of the two buoys in the sim.

The Northern Rachel buoy is a tetrahedron ‘race mark;’ it’s orange with a white stripe. Most Fedallah courses are designed so racing boats pass that mark counterclockwise, before heading to the Fedallah Finish a short distance away.

The Rachel Race Mark is interesting, since there’s another buoy, an old, rusted, Linden ‘nav can,’ sitting a short 44 m SSW of the Mark. That navigation buoy is really a warning marker, indicating the site of a sunken shipwreck.

A skipper that attempts to swing wide at that Nav Buoy could be in for a surprise. The submerged wreck is actually quite large, and rather easy to hit unless a sailor exhibits considerable caution.  But… how can you show caution if you don’t know exactly what’s going on beneath your boat? I wanted to know the details on this too… so I made some graphics that only show the objects in Rachel that extend above Z=16 m.

Why z=16? Well… the surface of nearly all Linden water is set to z=20, so z=16 defines a 4 m water depth. The Trudeau J-Class, Columbia, and prolly many additional vessels have keel depth over 3 m.  Other keelboats draw slightly less, between 1.5-3.0 m. (I have a fantastic picture someplace of Taku Raymaker’s ACA32 keel slamming full speed into a rock off Svar Beckersted’s  island in 2008…) 🙂

Z=16 seems a reasonable, minimum depth for safe sailing. Anything above that may qualify as a hazard or obstruction, although it certainly depends on the boat class.

Anyway, here’s the result.  The blue rectangle in the picture above shows all of Rachel sim. It’s nearly all deep water, except for a few objects in the northeast quadrant. The “mark” on that graphic indicates the location of the orange/white race mark;  Forty-four meters SSW from that point lies the Linden buoy, the one that indicates the wreck. Just north of the Linden buoy there’s a bright red object that shows where the shipwreck’s bow breaks the water surface. The rest of the wreck is submerged, but it continues south just below the water surface for a full 24 m SSE (irregular black lines in the graphic).

Be careful as you pass the wreck! You may think you won’t hit it…but…
Well, Kaz hit it… and Tak hit it…
You think you sail better than they do? 🙂

OK; with that basic info, let’s get practical… and talk about racing Rachel’s ‘obstructions.’ 🙂

If you look at the RACHEL BUOYS map illustration I posted above you’ll  appreciate that match race boats often end up close together in the latter half of the race doing a downwind run to the Rachel Orange Mark.

With two good skippers, that downwind long segment gives the trailing boat a chance to shadow the leader and catch up. The two boats are frequently in tandem when they reach Rachel, since shadow lets a skipper catch-up, but doesn’t help them pass the lead boat.

That sets up the two boats for a ‘confrontation with obstruction‘ when they reach the Rachel shipwreck. 🙂

The insert shown to the right- above has Amy and Kaz nicely parallel and heading toward the Rachel Mark. You can see the shipwreck obstruction with the Orange Mark just a bit further distant. The skippers need to clear the obstruction and then pass the race mark CCW.

However, the actual distance from the visible tip of the wreck to the race marker is 44 m, and race boats usually approach that gap at an acute angle, with sails winged. Under those conditions there is not enough room for both boats to  do this in tandem. So who has ROW?

Let’s take the case of Amy and Kaz, shown in the right side picture above. As they approach the obstruction, the two boats are parallel and overlapped; Amy is leeward and she has has ROW under Rule 11.

However, the shipwreck is a obstruction, and Rule 19.2(b) applies as they approach it:

19.2. Giving Room at an Obstruction
(b) When boats are overlapped, the outside boat shall give the inside boat room between her and the obstruction, unless she has been unable to do so from the time the overlap began.

Amy is the “outside boat” in this case, and she is obliged to give Takabou room. Depending on the circumstance, that could even mean Amy needs to turn so far away she could miss the race mark.

But wait... this issue gets complicated. Both boats are also fetching the race mark a short distance ahead. Match Races usually use a ‘two boat length zone‘ around race marks, and within that zone, Rule 18 turns on.

18 MARK-ROOM
…
18.2 Giving Mark-Room
(a) When boats are overlapped the outside boat shall give the
inside boat mark-room, unless rule 18.2(b) applies.
(b) If boats are overlapped when the first of them reaches the zone,
the outside boat at that moment shall thereafter give the inside
boat mark-room. If a boat is clear ahead when she reaches the
zone, the boat clear astern at that moment shall thereafter give
her mark-room.
(c) When a boat is required to give mark-room by rule 18.2(b), she
shall continue to do so even if later an overlap is broken or a
new overlap begins. …

When the boats enter the ‘zone,’ Rule 18 applies and Amy is the inside boat. She has right-of-way to clear the Mark, and Takabou is supposed to keep clear. However, if you look below the two boat length zone in this case is 46 m; it actually includes the northern end of the wreck/ obstruction!

Oops… Who has right-of-way now? Kaz has Rule 19 protection, but Amy is the Rule 18 Zone Diva.

I’m sure there are other opinions on this, but I thought it was pretty clear. In a match race with two boats approaching the mark, an obstruction requires the skippers to heed Rule 19 to avoid ‘collision carnage.’ This is an important issue, and Amy must yield to Kaz so he gets past that shipwreck.

However, as soon as Kaz clears the wreck, Rule 19 switches off and has no standing since there is no more obstruction. At that point, Rule 18 takes priority, and Amy has ROW for ‘mark room.‘ Kaz needs to return Amy’s favor and now give her space so she can do her thing.

Grin. Racing Rules are part of sailing fun, and RL sailors spend long summer nights arguing these points on Club decks after matches… I’m telling you my thoughts, but not insisting it’s right for SL; I’d love to know other views on this, so we have a consistent understanding for the next regatta!

11 responses to “Risks, Rules, and Rachel”