Trudeau ONE Upgrades to Fourteen! 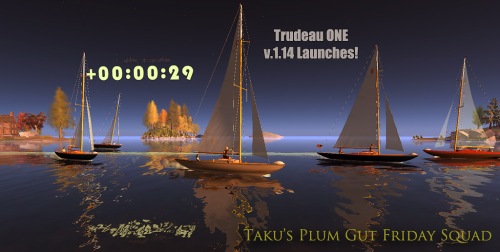 Trudeau ONE 1.14 launched last Friday. It came quickly on the heels of Trudeau ONE v1.13b, an upgrade that

fixed  a relatively minor tiller propulsion issue I wrote about two weeks ago. Back then, several sailors noted waggling the ONE tiller could inappropriately accelerate the boat under a small number of specific wind and heading conditions.

Although T-ONE v1.13b fixed that Tiller Trouble, the script changes induced a few new problems. Often ‘Perfection is the enemy of the good,’ and most sailors I spoke with were happy with the upgrade and willing to deal with a couple new glitches.

Jacqueline Trudeau wasn’t satisfied though, and the result is a quick new version: Trudeau ONE v1.14. 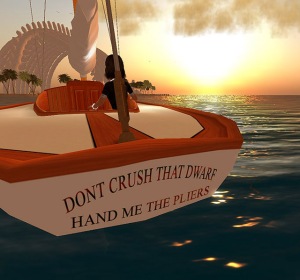 The v1.14 boat got a pretty enthusiastic response from the beta testers I spoke to. They all noted that the new upgrade distributed last Friday was way more than a bug fix. It handles differently from prior ONE releases.

I’m still looking at the boat’s performance, but let me highlight a few items:

1. Stiff is Better than Limp.
Most importantly, the boat now has a better match between visible luffing and sail propulsion upwind. Under some conditions in v1.13b, skilled sailors noted that making the sails luff (flap in the breeze) could paradoxically increase boat speed. That problem is now Fixed. In ONE v1.14, ‘What you see is what you get.” A stiff sail at an attractive angle with a hard camber foil will give you the power thrust any racer longs for. And as any sailor knows, a droopy rig with limp, flappy sails when you blow on them is just no fun at all. You certainly won’t win any medals that way! 🙂

2. More Compatible, Less Tender ONE
Most skippers I’ve spoken with think the new ONE upgrade is easier to sail, and report it’s compatible with more diverse race conditions. J Trudeau confirms that impression, commenting that:

“[ONE v1.14] will still lose speed from excessive heeling, but correct sail trim is given a higher emphasis in determining performance. It is less tender than 1.13b, and can stand up to 10 m/sec winds better while singlehanded.”

3. Tiller Comes With Options
There’s a new ‘Settings‘ feature for the tiller as well. In SL nearly all boats change direction by tapping the keyboard L-R arrow keys; if you press the Left arrow key, you turn Left. It’s actually more like driving a car than using a boat tiller.  In RL sailing it’s different, of course; you need to move the tiller opposite the direction of your turn.

In ONE v1.14, there’s a Settings Card option that lets you chose the way the tiller responds (the default is still the standard vehicle mode).

4. Better Deviant Diagnosis
Correcting a bug pointed out by JoyofRLC Acker, ONE v1.14 now displays the wind variation rate value correctly! In retrospect, I think Liv Leigh and I confirmed Joy’s bug in J-Class boats last year too… I admit I totally forgot about it after that Regatta 🙂 . Kudos to JoyofRLC for bringing it up again, and Woots, its fixed!

5. Phantom Boom (this item’s not new)
Although its not a new feature in this upgrade, 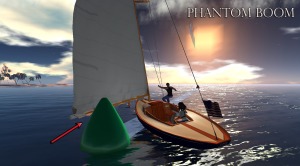 I thought I should mention that T-ONE has a phantom boom; this is notable since very few other Trudeau sailcraft have phantom rigs.

If you look at the image to the right, you’ll see what I mean. The boom in the image  just passed through the green buoy at the edge of the Queequeg raceline (indicated by red arrow).

A phantom boom gives you more options, and lets you adroitly snuggle up to marks and obstructions as you try to scrape off extra seconds in a race. 🙂 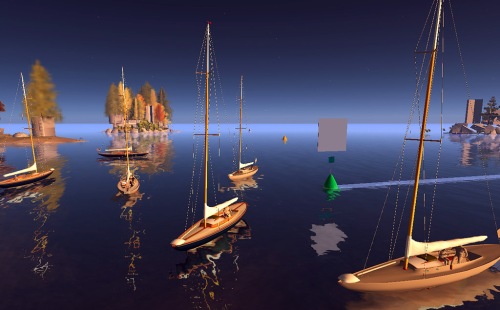 The improved responsiveness and compatibility of v1.14 is noticeable to most skippers on their first, serious sail with the new boat. However, documenting it will take more testing under a variety of conditions of wind, hiking, and heel settings.

So far I’ve tried the boat out using standard test conditions, and appropriately there seem to be only subtle differences between  the prior 1.12 and new 1.14 versions of this boat. The significant changes should show up with higher wind speeds and tests that push the boat’s performance.

Here’s a graph of ‘Speed Over Ground’ for v1.14 using a  baseline 5.0 m/s true wind speed. I use 5.0 m/s to get a baseline standard that isn’t complicated by heel effects or crew hiking. 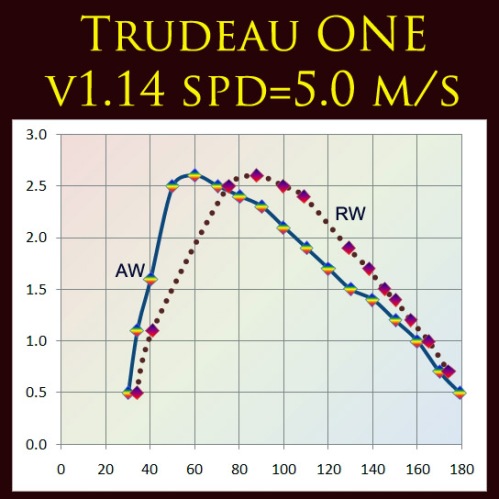 The solid line above represents Apparent Wind (AWA) conditions and the Dotted Line represents the same data plotted for the Real Wind Angle (RWA). Boat speed is plotted on the y-axis in m/s.

As you can see, with this low wind speed the boat’s velocity peaks around 60° AWA (80-100 RWA). This max boat speed is over 60% True Wind, and with increasing AWA it’s followed by a rather linear decline in performance as the apparent wind angle grows larger. That’s pretty typical of prior Trudeau performance plots, and closely matches the charts I’ve posted for early versions of T-ONE. Go take a look!

Heel effects and hiking are still strong in ONE v1.14, as shown below.

With ONE v1.14 sailing upwind in an 8.0m/s true breeze, the boat heels significantly. Sailing singlehanded, a skipper under heel can greatly increase boat speed by shifting to windward position and balancing the boat. With a 50-60° heading AWA, a solo skipper can boost boat speed by roughly 30%. of course this will vary based on true wind speed and crew size, but its a huge racing tool. 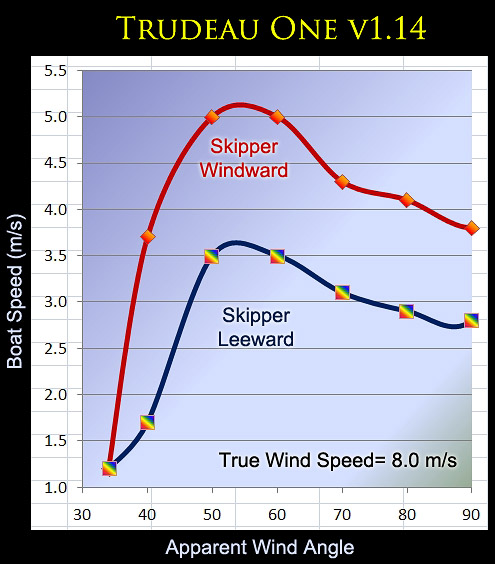 I’ll get you the other data sets as soon as the sims cooperate and I have time to collect the data! 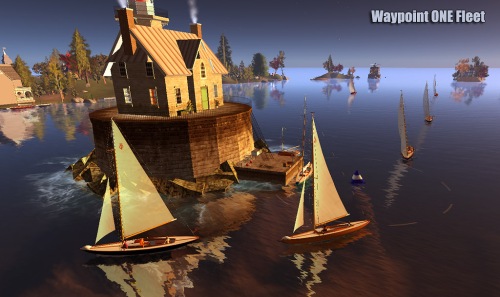 This entry was posted in Racing, Trudeau One, Trudeau Yachts, Waypoint. Bookmark the permalink.

10 responses to “Trudeau ONE Upgrades to Fourteen!”