Michael Linden is the Senior Content Lead for the Linden Department of Public Works; he runs the DPW Office Hour on Fridays at 3:00PM SLT in Shamon.

The Friday meetings are well attended, always fun, and pretty congenial — at least  when compared to other ‘Linden anger-management‘ hours many readers may have attended. 🙂  Michael’s DPW meetings address a variety of user content issues, suggestions, and problems, and he frequently reviews outstanding ‘ticket’ requests or ongoing major project issues.

If you have a gripe or suggestion, don’t ‘Go Postal;’ 🙂 stop by one of the Office Hours meetings instead. DPW is responsible for much of the sim content and user concerns over a spectrum of Linden sim priorities. They can’t help you with ‘server issues’ or sim-crossings; those are other departments. However, for many general issues that impact sim features, appearance and user function, the DPW Office Hour is a good place to learn what’s up and get simple, authoritative answers to your questions.

Blondin Linden also holds biweekly sailing-specific Office Hour meetings at 8:00 AM SLT in ANWR, and all sailors are more than welcome. The topics at Blondin and Michael’s Linden OH meetings rarely overlap, so interested sailors might benefit from attending either or both sessions; you can choose what fits, based on your time zone and work schedule. (Note: Michael and Blondin coodinate efforts, so you’ll get the same answer at either session. 🙂 )

Over the past few years many sailors have advocated for interconnected waterways that would allow vessels to travel long distances. In a September office hour, Michael Linden addressed this issue and listed several possible locations under consideration for new coastal water sims that might serve this need.

He strongly emphasized these ideas were still vague topics under consideration, and he clearly indicated that none of the projects might ever get realized. Nonetheless, most in the audience felt his willingness to share such ideas was both gracious and reassuring.

The topic came up as part of a short discussion on options to connect Bay City to the major Sansara sailing regions lying East. Here’s the transcript (with my edits and redactions):

Michael commented that “These are all just vague proposals: NOT promises…” so back in September I decided not to write about the possibilities he raised. I assumed the Linden staff cuts might limit deployment of even the best DPW ideas. Well, i was wrong. 🙂

This week ‘Pie in the Sky became Reality,’ as DPW rolled out over twenty new sims to enhance the Nautilus-region coastal waterways! Here’s a list of the new sim names and locations:

Here’s a chart showing the location of the new sims (Click on it for a for a larger view): 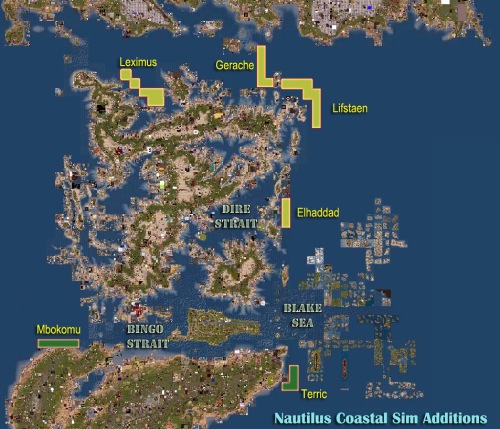 The additional sims include a new link that joins Nautilus and Corsica (WOOT!), and a sequence of coastal sims that wrap around the land builds and obstructions in Northeast Nautilus.

The new Nautilus sims make it possible to sail remarkable distances. For example, a skipper could voyage all the way from Spoondrift in USS’ Sailor’s Cove over to Triumphal in West Bingo Strait, then chose to venture North either past Danshire YC in Knaptrackicon or  by Tradewinds in Dex, sailing through Dire Strait or along the new Elhaddad route. That sailor could wrap around Northeast Nautilus using the new ‘Lifstaen’ coastal waterway, and then choose one of two Northern passages into the continent of Corsica: either the traditional far West passage near Kinrara (wave to SLCG there!) or the brand new ‘Gerache’ waterway shown above.

Of course, once you make it to Corsica you then get a whole new plateful of options :-). You can go visit ElMegro Magic or Aquarius Paravane or dozens of other sailors with marinas waiting to welcome you… or you can just push on and circumnavigate Gaeta. If you are that ambitious, be sure to check in with Beejee Boucher and Lyle Lane along the Gaeta coast!

Frankly I can’t add up all the sims that kind of cruise plan would encompass… but wow, it’s a lot… and its now possible. 🙂

Is that important to sailors? 🙂 Well, it took Kittensusie Landar and Mowry Bay Cruising Club about five minutes to announce a fleet event using the new sims!

I think there’s no question that this small passageway will make a truly huge difference in the traffic and economy of both linked regions. Thank you Linden Lab and DPW!

The ‘Nautilus Chart’ above also shows in Green two small, coastal ‘sim patches’ in Satori, the continent South of Nautilus.

TERRIC sim lies along the Northeast coast of Satori, just south of Bingo Strait and near Blake Sea. Well over a year ago I wrote posts saying that Terric was the Southeast block to coastal cruising; there was no way around that sim. Many other sailors tried, but sadly agreed: TERRIC was the southern end of the sailing world for cruisers (at least if you came from Blake or Nautilus).

In September DPW suggested a four-sim bypass passage around Terric. That could open sailing waters along the East Coast of the entire Satori continent. Not a bad idea… 🙂

But what about Satori’s West Coast? Well, apparently DPW’s thought about that too. If you look at the chart above, a few coastal water sims North and West of MBOKOMU could provide a waterway link to expand options for Southern exploration along the Northwest aspect of Satori, while opening up sailing throughout the Western limits of Bingo Strait. I love it!

A MBOKOMU coastal simset seems a very small effort, but one that might yield a large payback in traffic, user interest and increased property value in the adjacent regions.

A few weeks ago I discussed here the DPW changes currently underway in Sansara. I focused on the traditional raceline and sailing regions, and only briefly mentioned Bay City.

Bay City is a community located on the far West shore of Sansara, and it holds an important place in the primordial geopolitical and cultural history of Second Life.

Bay City was DPW’s first project, and it served as a ‘template’ and test ground for LL’s concepts of urban planning. New Port Yacht Club is there, with access to roughly a dozen sims of sailable water.

Bay City has many great people, and the community is pretty successful. 🙂  On several occasions I’ve tried to attend Bay City events, only to find the sims so overcrowded  I couldn’t get in! 🙂 I guess that’s a good sign!

DPW  listened to Bay City’s request to connect their water and Yacht Club with the other Sansara sailing regions lying East. Michael Linden’s  ‘vague list‘ of possible new coastal sims includes two options for multi-sim corridors that might do the trick. I’ve indicated them in red below:

If you click on the above chart, you’ll see the possible “Northern Option” is a seventeen-sim route that connects Bay City’s Gulf of Lauren to the ANWR connector that links Sansara to Heterocera Atoll. That string of seventeen water sims might also provide coastal waterway access to multiple sims in the COLORS region along the Northwest Sansara shore.

However, the biggest problem with the “Northern Option” in my opinion turns out to be ANWR’s separation from the major Sansara waterways; ANWR does not easily link to Mare Secundus, MBYC, Sea of Fables, or the East River Community.

In other words, even after the addition of seventeen new water sims, Bay City could not connect with any of the major Sansara waters – or sailing groups – that lie South and East. Bay City would stay isolated from many sailing events. (That’s not good 🙂 )

A much shorter, more  practical, and better way to connect Bay City to the other Sansara sailors and sailing regions might be Michael Linden’s proposed “Southern Passage,” a nine sim connection from Luna Palisades to Abbotts that’s shown in the chart above. Marianne McCann discusses that option on her blog and argues persuasively for it. 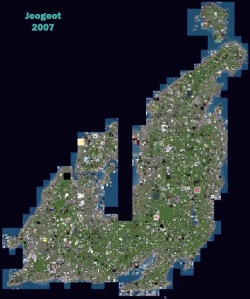 If you are new to SLSailing, you may not know Sanchon, and probably have not sailed much in Jeogeot. 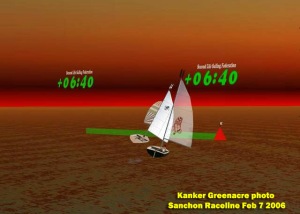 Well, Sanchon was home to Vagabonds Yacht Club, and was a harbor of refuge for many unruly pirates in the early years of SL Sailing.

My first connection to SL Sailing was in October 2006 at the Sanchon Boat Show. I met people and I saw boats that expressed the same humor, knowledge, and excitement I knew from RL sailing. I decided to stay around.

Vagabonds is now gone, but woots! DPW remembers, and one of the proposals is to expand the coastal waters near Sanchon… so sailors can again sail around the big island there. I always thought of that island as, well… Tortola, the pirate lair of legend. 🙂

Please remember, the sim additions above were just ideas, and not in any way guaranteed. However, I think they indicate DPW listens to sailors, and in this instance at least LL is making a sincere effort to incorporate sailor’s needs in their planning.

Now can we talk about those awful sim crossings again? 🙂