A few days ago I talked about the newly-launched Leetle Cat II, and mentioned that ‘reefing was back‘ as one of the sail-control options. Well, since then I’ve had a chance to take a closer look at the Cat, and I’m ready to change my opinion. Reefing “isn’t back;” it’s totally redone in this boat!

“Reefing” is a common sailing technique that helps a skipper control a vessel in strong winds. Reefing reduces the boat heel, helps balance the helm, and makes the sail more efficient. Probably most important, shortening sail on a blustery day can also keep a boat from capsizing. There’s a great, short article on Reefing the RL Beetle Cat by Jennifer Kano over on the Beetle Cat website. Go take a look!

SL Reefing was first introduced in the Trudeau Twenty that launched during the summer of 2008. A series of rather wonderful Classic boats with reef points quickly followed, including the Knockabout, Leetle Cat, Tahiti Ketch II, J-Class, Rozinante, Columbia and Patchogue (did I miss any? 🙂 ). In each of these boats, setting a reef point produced a substantial upwind speed boost against a stiff breeze .

The Trudeau Columbia is a good example of this “old Reef effect.” The chart below plots Columbia’s speed as a function of Apparent Wind Angle (AWA) in a boat sailing with a constant Real Wind of 11.0 m/s. The red curve shows Columbia’s performance unreefed (Reef 0). In contrast, the green curve shows the Reef 1 effect, and the blue curve shows what happens with Reef 2. With an AWA 40 heading, Colombia’s boat speed is actually four times greater with Reef 2. That’s over 30% faster than the Real Wind setting (yikes!).

I’m bringing this issue up today to announce the Reefing in Leetle Cat II is now totally different (WOOTS!). In fact, LCat II’s Reefing is pretty fantastic, and let me show you why! 🙂

As I mentioned above and in prior posts, in RL reefing does not make a boat go any faster, but reefing does something just as important. It helps balance the helm, makes the sails more efficient, and helps prevent capsizing. Reefing actually slows the boat.

The chart below shows the effect of reefing on boat speed in the Leetle Cat II. Four different curves are displayed, so it may seem confusing. Let’s walk through it.

All the measurements shown below are from the current LCat II, not a beta.  The test boat had a single sailor aboard (me, with no crew), and the hiking position and sail sheet settings were adjusted to maximize boat speed. I used a single apparent wind heading (AWA 40), and the centerboard was down throughout.

Under those conditions, the x-axis below displays increasing real wind speed (‘boatwind‘) from 5.0m/s to 12.0m/s. The y-axis shows the resulting boat speed in m/s as a function of boatwind intensity.

Now, just look at the red curve below. It shows the boat speed that results from each stepwise increase in Real Wind with the sails unreefed (Reef 0). For example, a real wind speed of 8.0m/s results in a boat speed of 3.3m/s. I previously noted that LCat II had a baseline upwind performance that was approximately 40% Real wind. The red curve below is consistent with that finding.

You can also see that the red curve “flattens out” as the real wind increases to the 9.0-11.0m/s range. That happens in RL too. I talked about why that happens for the ACA3.0 a few months ago.:-)

Today however, take a look at what happens to the red curve below with a real wind speed of 12.0m/s and an unreefed boat! The yellow arrow below indicates where the boat suddenly comes to a abrupt stop.

Of course it suddenly stops in high wind! With that strong RWS and full sails, a single skipper can’t counterbalance the boat. LCat II capsizes!! 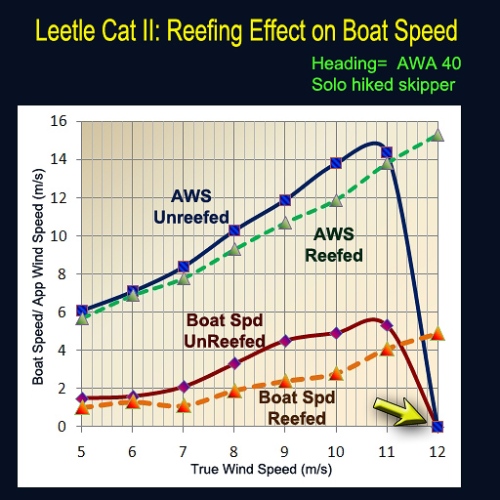 OK; now take a look at the orange, dashed line in the chart above. It shows the same speed curve as before, but this time the sail is reefed. Since there is less sail driving the boat, maybe it’s no surprise the boat goes slower for all wind speeds between 5.0 – 11.0m/s.

So… what’s the advantage to reefing? 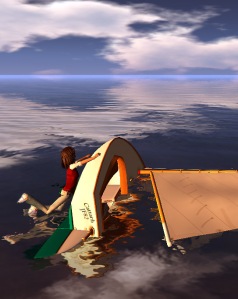 GRIN. Look at that final true wind speed of 12m/s on the right end of the chart, and that yellow arrow too. Without reefing, a 12.0m/s gust can knock over your cat boat, and dump you in the water. Setting a reef point lets you keep going!

Since most races, cruises… and real life situations involve changing wind directions and rather unpredictable gusts, deciding when to reef a boat can prove rather tricky. 🙂

I have no apology for that, but I do have a huge shout-out for J Trudeau’s new reefing in LCat II. It’s a major difference from past reefing you may be used to… and it’s spot-on accurate in style and substance to reefing in Real Life. This change came with no fanfare I’m aware of… but, well.. “wow.”

In my opinion LCat’s Reefing brings us all a step closer to a true, real-life sailing emulation in SL! 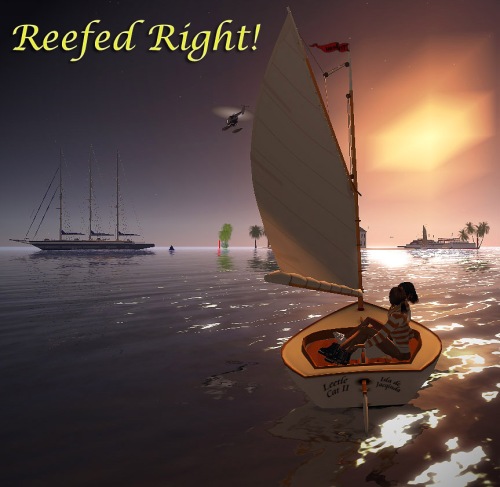 One response to “Reefing the Cat”