Halfway through the ONE WORLD Finals two races were already up on the scoreboard, and KENOBI and EUREKA each held first place wins. However, two races still remained, and the final score would only consider each team’s top three finishes. The championship was still a toss-up as Race Three began.

The  F-3 racecourse had some of the same chemistry as the first race’s F-1 course. The fleet would need to beat upwind around Sailors Cove Island to reach the first mark in the Southeast corner of Breakers Point sim. From there it was a two-sim beam reach to the Sugar Reef Orange buoy, followed by a broad reach spinnaker leg to the yellow mark in Flat Hammock. Any boat still under sail would then go back to a beat to round the far mark in Breakers Point, followed by a dead run all the way Home.

KENOBI had arguably won the Start in each of the first two races, and they saw no need to change tactics this time, either. 🙂

If you watch Hawk’s Prestart videos, in each case during the last minute you can see Kenobi sailing West-to-East parallel to the line, until she’s in front of the other three teams. Then with 20-30 seconds to go, Kenobi suddenly throws the tiller over hard, coming about to Starboard. She then uses the boat’s accrued momentum to sprint toward the edge of the raceline near the red buoy. It’s a textbook perfect start.

The first image below (A.) shows Kenobi just after tacking. With that maneuver she stole the lead and had the juice to gain distance (B.), cutting the line eleven seconds ahead of SVC-472, and nearly a half minute ahead of FIYC and EUREKA! Woots!

However,  Please don’t ever think that what Bunnie pulled off was easy, or just due to random luck. If she placed KENOBI’s final prestart tack a few meters too low or a few seconds off either way, the other three boats could have thrown pretty much the whole Rules Book at her, and her team would likely still be in Plum Gut today making up all the Penalty turns they deserved! 🙂 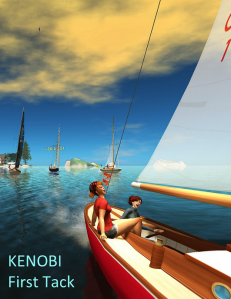 Luckily, the Star Wars trio of Bunnie, Seraina, and Dunan lived up to their Jedi Master reputations, and pulled it off flawlessly.

Following the Start, in some ways the fleet’s upwind beat through Flat Hammock looked remarkably similar to Race #1. KENOBI was out in front and holding the ‘windward pole position,’  with all the tactical advantages that entailed.

Once again, Momomos was traveling in Bunnie’s wake, a boat-length back. Momomos decided to keep SVC-472 glued to KENOBI; I thought that made good sense. If he could keep within striking range, Momomos might yet well trap Kenobi later in a shadow duel.

The first image above shows that KENOBI was again able to repeat the trick from Race #1. Bunnie set a first tack point so audaciously high that she could flip to a new port course that exactly ‘threaded the needle’  through the narrow passage into Breakers Point. Momomos was also game, and he captained a course that let SVC-472 match that maneuver. However, he couldn’t quite match KENOBI’s speed in the process. 🙂

EUREKA and FIYC were in the 3-4  positions crossing the Start. Even worse, they were considerably leeward of the leaders, and had no chance to make the upcoming narrow channel in two tacks.

However, the images I have show that EUREKA was traveling just windward of FIYC, and Alain was effectively blocking Armano with position and shadow.

I think Alain’s a pretty incredible skipper with supreme tactical awareness (and if time and space permitted, I’d love to tell you about all the past races that prove that opinion). However, this time I couldn’t quite figure out why EUREKA decided to cut to port tack early (see above). I admit that maneuver made sense at some point, but it also unlocked the handcuffs EUREKA had on FIYC… 🙂

Anyway, if you look at the full image I posted earlier, you’ll see that both EUREKA and FIYC were forced to make two extra tacks to fall in line with the leaders, and that put them considerably behind as they fetched the first mark.

The second mark was in Sugar Reef, and the first image above shows the lineup as Kenobi took the turn. The rest of the fleet was more than half a sim behind, and Armano had moved FIYC into a parallel and windward position relative to SVC-472.

It looked like Momomos was suffering ‘lag distress‘ near the sim border, since the second image shows FIYC and EUREKA gaining substantial ground. They both passed and headed for the next mark. 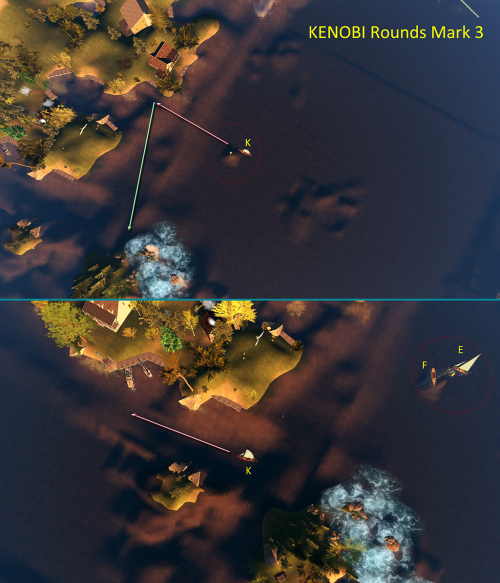 The annotated images above reveal the situation at the third mark. KENOBI held a substantial lead, but evidently planned this all along. When Kentrock designed this course, he knew the next leg held a hidden trap: The fleet would be sailing directly upwind through a half-sim narrow channel to the final mark.

It certainly was nothing anyone could get upset about, since the distance was rather short and the trouble was pretty obvious. However, it’s also one of those things that takes a certain degree of caution and planning (sort of like invading Iraq…).

Anyway, you can see above why the KENOBI clan deserve the big bucks they get paid; Bunnie intentionally overshoots the mark Big-Time, setting KENOBI up to traverse the tight channel in two tiny tacks.

WOOTS! Philip the Navigator never did it any better! 🙂

There was no stopping the K-Team; Race Three went hands down to the Kenobi Trio, with a finish time a full forty seconds over FIYC’s Armano and Cait.

But please… if you were paying attention, you also saw Armano claw FIYC’s way back from a bad start against wondrous skippers with better positioning. Against all odds, FIYC fought back to take the #2-Spot against the infamous Mills Gang. Wowzers.

FIYC was psyched, and Ready to Rock-and-Roll in Race FOUR! 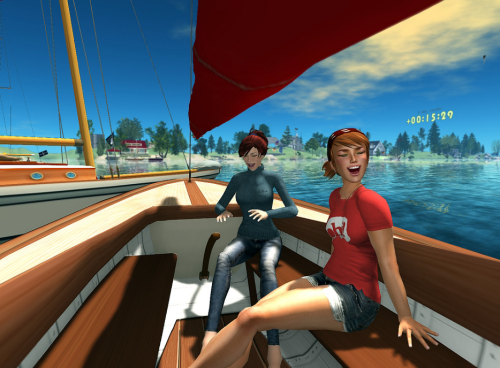 Posted in announcement, ONE WORLD, Racing, Sailors Cove, Trudeau One