Last November I wrote about the Linden Department of Public Works’ waterway upgrades in Nautilus. Overbuilding and residential ban lines in some Nautilus spots made long distance cruising difficult and often pretty frustrating.  It was also hard to argue about it. After all, property owners invest considerable money in their parcels, and the owners have a right to build and manage their land as they see fit. The Open Seas Project started as a way for sailors to work cooperatively with such landowners in a positive effort to keep navigation channels clear. 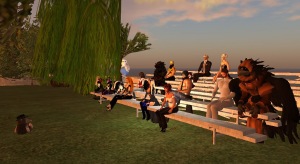 Last September in public Office Hours, Michael Linden discussed a plan that might fix the waterways problem. He thought it made sense to add Linden coastal water sims at congested choke points along the continental edges.  That way, sailors could bypass blocked passages, and travel around high density residential and commercial zones.

The idea for new coastal waterways was pretty universally supported, but I think all sailors understood the problem couldn’t be fixed overnight. Adding additional water sims would take time and effort… and no surprise, those extra sims cost money.

However, despite my pessimism, A month later a bumper crop of new coastal waterway sims showed up in Nautilus! Sailors gave out a pretty massive “WOOT!” that was loud enough to shake the grid!  Many sail clubs immediately jumped in to take advantage of the changes, organizing rather massive sailing events that linked Corsica and Nautilus. 🙂

The issues about coastal waterways and navigation routes also came up in public discussions of the Sansara upgrades last summer. Bay City is a great, vibrant Sansara-based community in Second Life, with a nascent yacht club (New Port) and a sizable patch of dedicated Linden water (Gulf of Lauren and the surrounding channels).

However, there was no water route connecting Bay City with the the large seas and multiple sailing groups located in Fables, Ice Bay, Mare Secundus, Mowry, ANWR Conntector, and Heterocera Atoll.

A few ‘coastal waterway’ options were discussed as possible fixes for this problem, but again I think most sailors felt the changes might not materialize. I strongly supported new coastal waters, and I admit “I’ve never seen a water sim I didn’t like.” However, I also knew SL was going through major staff cuts at the time. I didn’t want additional water sims if that meant DPW might lose staffing, or their precious Moles…

(Don’t worry; no one ever asked my opinion on that topic. 🙂 )

Well, Kudos to Blondin and Michael Linden, and the absolutely great Bay City group for working this out! As Marianne McCann announced last week, a sizeable string of coastal waterway sims were just added to the Northwest corner of Sansara, linking Bay City to the ANWR connector and thence to the entire subcontinent of Heterocera Atoll! Woots!

Wowzers! The new passage lets you start anywhere around Bay City; if you are new to the area, you might try the Linden dock and rez point in Shamwari (see the pic at the top of this post 🙂 ) Otherwise, you can rez anywhere you want in Gulf of Lauren/ Straits of Shermerville waters, and then just sail Northeast…

If you look at the map, you’ll see that course brings you to a new quartet of sims just North of Shamwari: Hiltrude, Landres, Auda and Pepin. They take you to a wide channel that cuts through Fuschia and Swanhild. That passage will then bring you to open water in the brand-new Coastal Waterway sim of Grifo… but that’s just the beginning.

In an apparent tribute to the Octo-mom of contemporary culture, Grifo is the gateway to an identical linear octet of conjoined coastal sims that run all the way to Cyclops, a venerable sim that forms the southern root of the ANWR channel.

Grin, in case you’re new, or if you’ve been working too hard… or if you’re in complicated divorce proceedings 🙂 … let me remind you that the ANWR channel links the continent of Sansara to the subcontinent of Heterocera Atoll.

Is that important? Well, to many it is. The ANWR region sims have near biblical import for sailors. ANWR provided the Holy Waters that gave rise to the legendary Flying Tako. It was the test-track, the proving ground for the Kazenojin, the  legendary Illuminati of SL Sailing… back in the Ancient Times. 🙂

I wont expand on that, since many sailors in SL know the waters of Heterocera and their history better than I do. I’m excited to hear their comments and suggestions about the new linkage. The “Northern Route” coastal waterway now opens a major passageway that’s full of options and new opportunity for sailors, landowners, and maritime businesses.

This is Sansara’s story too, and Kudos go to all the wonderful people who patiently built communities on the shores of Sansara’s Seas. They deserve all the credit for the great changes across the continent this past year. I’ve listed their names in posts several times before, but today let me give a special shout-out to Bay City and East River Community. They kept the faith in Sansara over several years, and built much of the community we all value there.

GRIN; in that context, on May 14, Bay City will celebrate the great new changes in their corner of Sansara. I’m hoping the local sailors and the massive Leeward Cruising Fleet can join in for that event. It would truly demonstrate how much the new waterways are appreciated, and how much we all depend on each other.

Behind the scenes a huge THANK YOU also goes to Blondin and Michael Linden, as well as the whole DPW mole team who worked on the content changes.

Sometimes users (like Jane Fossett) get frustrated over in-world problems and whine a lot. In my case, I wrote several blistering articles a couple years ago on the “Open Sim Crisis” and related issues. I’m sure I’ll complain again, too.

However, let me today give credit where it’s due. From my perspective, the efforts by Lindens to improve communication with sailors over the past several months, in addition to the above-mentioned maritime upgrades, the coastal waterway sim expansions, and the innumerable small fixes they did for individual sailors are all noteworthy. In fact, they are pretty impressive.

So if you’re a sailor, although it may get you a TOS violation, I’d suggest you go hug a Linden next chance you get.
I mean, hey, it’s worth the risk. 🙂 LL isn’t perfect by any means… but their recent track record with sailors shows they are trying hard.
It’s difficult to fault that. 🙂