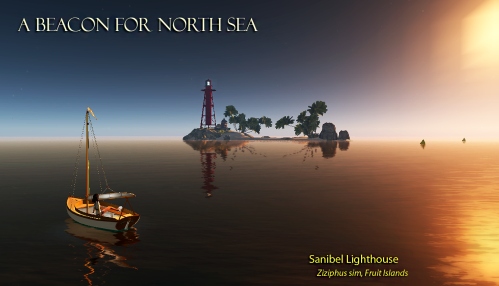 A Beacon for North Sea

Two days ago I wrote about the new North Sea region in Fruit Islands. The expansion adds twenty new open-water sims to Fruit’s extensive waterways, and it promises a wealth of future sailing opportunities for racers and cruisers alike.

Today I’d like to follow up on one, small feature of the project, the lighthouse that forms North Sea’s centerpiece.

If you click on the map below, you’ll get a 2144 x 1588 pixel view of the Northwest corner of Fruit Islands; it shows the names and locations the individual North Sea sims. Right in the center of that map you’ll find a new lighthouse, located on a small island in Ziziphus. 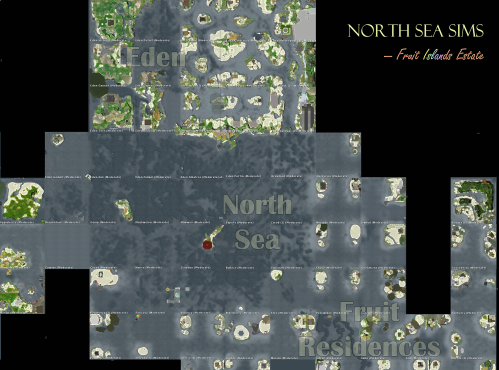 The North Sea Light will stand as a signature landmark for sailing in Fruit Islands, and its lit beacon will serve as an enduring reference point for vessels crossing North Sea’s open ocean.

Like most sailors in SL and RL, I think lighthouses are pretty important. For thousands of years, the light from these fixed navigational beacons guided sailors to distant shores; they fueled the history and legend of human progress.

Maybe that sounds excessive and overstated… but I don’t think so.

Even in 2011 on a dark night surrounded by choppy sea, the flash of a familiar lighthouse signals safety to any sailor, and that simple message means everything.

The lighthouse beacon points the way to a friendly harbor, and the beacon’s identity and cadence often means ‘home’ to a weary crew as they end a long passage.

Elbag Gable understood this as he planned North Sea. He asked RJ Kikuchiyo to design and build an iconic beacon that sailors would recognize and use.

If you’re reading this article, you already know RJ; he is a remarkable builder, teacher, and mentor in SL, and his knowledge and taste for nautical builds is legendary. He has a particular affection for lighthouses, and his

reproductions can be found on all the major waterways in Second Life. A close look will reveal each build is wondrously detailed and historically accurate;  collectively they form an integral part of the spirit and substance of SL Sailing.

In fact, it’s notable that nearly all of the major sailing communities have their own signature Kiku-Craft beacon. Look around, and you’ll see what I mean.

I could go on-and-on with this list, it’s pretty long, but you get the idea. 🙂

Anyway, let me get off my soapbox here and tell you about the new lighthouse that just came on-line in North Sea. 🙂 RJ modeled it after the Point Ybel Light on Florida’s Sanibel Island. Here’s a pic of the RL structure:

Sanibel lighthouse dates to the late 19th century, and it was the first lighthouse on the Florida Gulf Coast north of Key West. It’s positioned on the East end of Sanibel Island, and for over a century it’s served as a coastal Aid To Navigation, guiding ships into nearby San Carlos Bay. The Coast Guard maintains the beacon on its ‘active’ list still, but the town of Sanibel now controls of the property.

The lighthouse sits on a foundation of iron pilings, and the 30 meter vertical structure consists of an iron skeleton framework that supports the central, cylindrical tower. The beacon on top alerts approaching sailors with a white, double-flash that repeats every ten seconds.

Actually, in that context I’ve often wondered about the difficulty light keepers must have endured, as they try to sleep while an intense light flash went off  repeatedly through the night. Well, while looking through the Sanibel archives online this week, I got a hint about a possible coping strategy some light keepers may have used.

It turns out one of the historic Sanibel light keepers had thirteen children while he was maintaining the light. 🙂 He might have had difficulty getting to sleep, but at least he used the time productively!

OKOK, unrelated to that comment, let me add that Sanibel’s lighthouse is a well-recognized and important part of the Gulf Coast/ Caribbean region history, and several decades ago it was recognized as a national historic site in The USA.

Sanibel Light is a great tribute to sailing, and RJ has re-created it as an icon to sailors in North Sea. From it’s prominence in Ziziphus sim, it will stand as a constant monument in easy view of all those enjoying the new ocean sims.

So… next time you sail past it, look up and think of all the generations of sailors world-wide who went before you, and then go hug Elbag and RJ for keeping the spirit and tradition alive in SL!