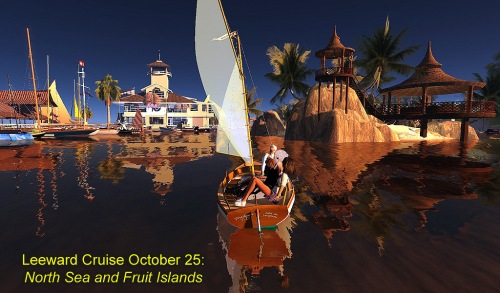 LCC is a rather huge group of bodacious boaters, and it keeps getting bigger and better. The excursions are coordinated by Kittensusie Lander, Cate Foulsbane, and Chaos Mandelbrot, a truly terrific troika of seasoned skippers.

The LCC Tues-Cruise is usually orchestrated by Chaos. In fact he’s done a nonstop great job at it each and every week, pretty much forever… or at least since that asteroid ruined Caribbean cruising back during the Cretaceous period.

(Editor comment: Please note, the Cretaceous Epoch should not be confused with SL’s legendary Cetaceous Racecrew.)

Anyway, on October 25 Chaos was detained by RL stuff and he asked for some stand-in assistance until he could arrive on-deck. Well, in short order a bunch of great Fruit Islands sailors with curiously familiar names all chimed in to help. 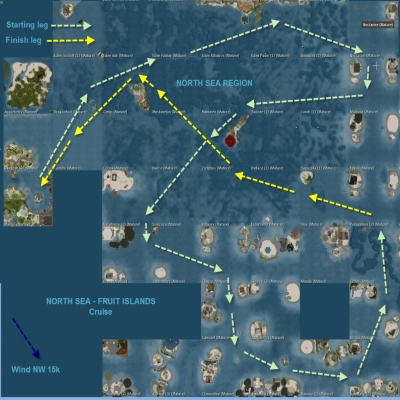 The Cruising Crowd on Tuesday is often pretty big and takes some planning. Elbag, Hawk, and Lizzo knew this, and decided LCC needed a full sim for both the cruise Launch and Finish. Luckily, Mango Yacht Club was available… 🙂 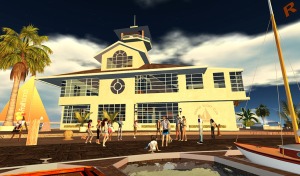 MYC has a beautiful marina and a great, multipurpose club designed by Equinox Pinion and Dennis Lagan, the co-owners of Fruit Islands Estate. RJ Kikuchiyo had a big input there too!

Tuesday’s launch from MYC was a good chance to remind sailors that Mango sim has recently changed it’s Fruit location. When the North Sea project rolled out, Mango moved to the far West edge of Fruit Islands, as shown on Hawk’s map above. It’s protected harbor now opens on North Sea, and woots, that’s a pretty nice spot!

I guess the LCC fleet got a chance to decide that for themselves on Tuesday. By cruise time, Hawk announced that over twenty sailors were already heading out from the Mango dock into the surrounding sims. Actually, the fleet quickly grew to nearly twice that size; and I have personal evidence! 🙂

Once the flotilla took off and stragglers on the dock were cared for, I launched a boat to sail ‘clean-up’ behind the fleet. Well, within a minute from the time I hit the water, I was joined by two new sailors who were a bit late but wanted to come cruise. Right behind them came LCC’s Antarctic Admiral, Chaos Mandelbrot. Without warning he fell from the sky, his tiller in hand.  I stepped aside so he landed on the helm! 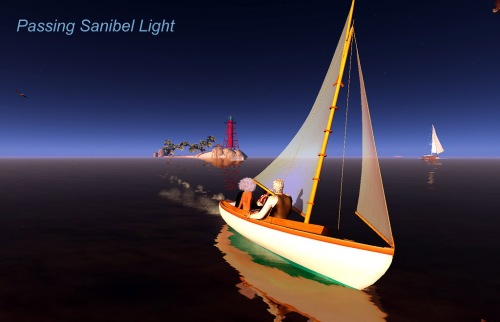 So in less than sixty seconds, my solo fleet addition turned into a commuter bus carrying a full crew. 🙂 We actually rezzed a new Trudeau Twelve to make room for everybody, and I’m guessing a lot of similar stuff was going on in the cockpits of other skippers, as the number of cruisers ramped up across North Sea. 🙂

I also think this is one of the hidden strengths of Leeward Cruising. People can just show up as their schedule permits; it’s all about fun, and there’s no stress.

Hey, you don’t have a boat?
Well, a LCC skipper has space for you.
Are you working late and can’t make the cruise?
Well, come in the middle, or just join the party after! 🙂

It’s hard not to love LCC’s attitude. The fleet keeps growing, the courses get more diverse, and the LCC organizers take it all in stride. Thank you to Tory and Manul for getting the cruising ball rolling in SL, and for setting the strong foundation that started it all. As I mentioned above, please also give a loud woot to Kitten, Cate, and Chaos. They continued the LCC legacy, and grew it into a legend. 🙂

Thanks to North Sea and Fruit too! The North Sea sims had good grid weather for the Tuesday cruise, and there were fairly stable sim crossings. In no small measure that resulted from Hawk and Fruit Island’s vigilance restarting recalcitrant regions prior to the LCC take-off.

There were four of us sailing a small boat Tuesday in the cruise.  Given the recent SL troubles, fraught with server issues and failed server hand-offs, I thought our vessel was doomed. However, Trudeau Twelve is a pretty rugged build, and North Sea kept a watchful eye. We actually made it the whole way with only a single mishap. 🙂 Cough… Our Admiral-Penguin-Skipper fell overboard briefly… Apparently, the sailing conditions were good enough that he decided to upgrade his graphics drivers while we were crossing dozens of ocean sims… 🙂

Anyway, after Chaos fell overboard, the rest of us drifted… telling jokes, eating crudite, and discussing Lindsay Lohan’s career. Chaos was back after a quick reboot however, and we forged ahead.

I admit North Sea is pretty interesting. I had my draw distance set to around 480m and we were cruising with a sizable flotilla. Despite that, for much of the time I could only see open water, with a sprinkling of distant sails on the horizon. It was a lot like RL offshore cruising! 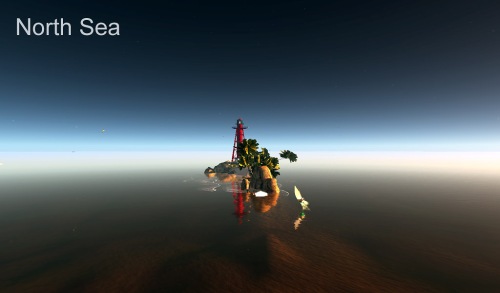 North Sea, Eden, and Fruit Islands together present new options for sailing events, providing a combination of open water and narrow channel passages that will meet the needs of many skippers and event planners.

Although lots of good water is critical, let me also add that cruising is mostly about Friends. You may cover a long distance confined to your boat and close crew-mates, but the whole inspiration comes as a joint venture coupled with many other audacious captains. Your boat is just one part of a whole fleet, and you’re all heading to a far-off destination. 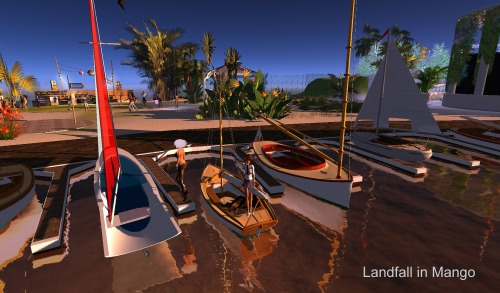 On Tuesday, that destination landfall was back at Mango, where Bennythe Boozehound was spinning his playlist. It was a great prize to strive for. 🙂

Yikes, it was a pretty great cruise overall, and I hope there are many more to come! GO LCC!! 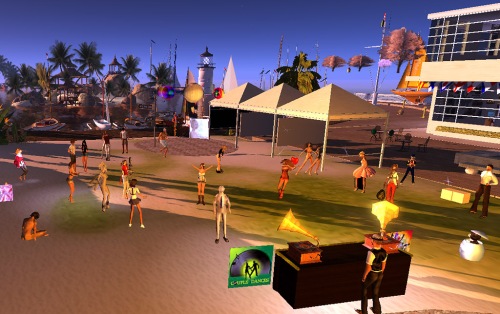 2 responses to “Kudos to October 25 Cruisers”