A few days ago I wrote about griefing attacks, and the damage they do to SL growth. I cited a few recent attacks, including one at Mowry Bay, by something called “VR6 KABOUL .”

Well last night Sansara was hit again. Chaos Mandelbrot discovered the attack while sailing a test-drive of the Tuesday Leeward Cruise route. As he landed on the Second Wind dock in Fudo, a snowstorm of colored circles, posters, and ‘zombies’ flooded over him, as shown in the pic above. Second Wind’s Francois Jacques immediately came to Chaos’ assistance, and Ranger Upshaw from the Second Life Coast Guard followed right behind. 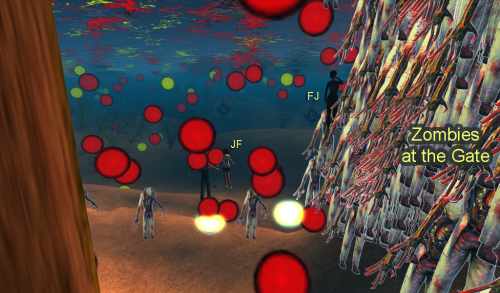 Francois shut off scripts and object entry into the Fudo Sailing Center, but that didn’t solve the problem. The griefing flood came from outside the sim, and attack objects all stopped at the sim border. The picture above shows an impressive mountain of zombies piling up on the seafloor boundary just outside Fudo.

Ranger Upshaw then helped identify the location of the emitter source for the attack, and Francois recruited assistance from the Linden concierge to deal with it.

Within an hour the skies cleared again and the zombies (as well as all else) disappeared.

Hopefully Lindens can get to the root of this problem and prevent it, particularly since the poster logo for last night’s attack looked very similar to the Mowry Bay grief episode I discussed before.

We need these disruptions to end. 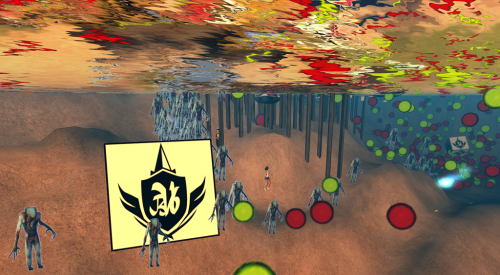 This entry was posted in announcement, Griefing, Sansara. Bookmark the permalink.