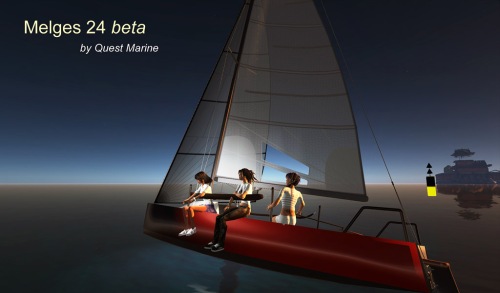 I was sitting on the raceline in Butternut today, trying out Hawk‘s new North Sea course for the upcoming Solstice Challenge. Qyv Inshan then drove up in a sleek new roadster, and I begged to go for a ride!

Qyv kindly complied, and introduced me to Quest Marine‘s yet-unreleased tribute to the Melges 24. 🙂 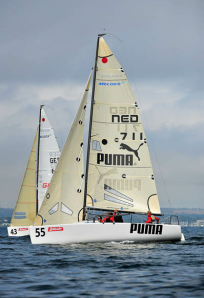 The real life Melges 24 is a high performance, relatively low maintenance racer that’s grown a huge, global following in the past two decades.

With a crew of three or four, the boat’s a speed demon due to it’s light weight and a hull shape that’s made to plane.

I usually don’t like posting about beta boats, since anything bad I notice will usually get fixed before the boat is launched, and anything good I comment on could just as easily be eliminated in the final production model. In this case however, I couldn’t help myself! Even after a short ride, it was pretty obvious the Quest Melges 24 has great features any virtual racer is going to love.

Let me list just a few items that had me grinning ear-to-ear today:

1. The boat’s wind- driven algorithm is appropriately sensitive to heel angle, and so the acceleration will vary depending on how skillfully the skipper handles the sheets and how well the crew keeps the boat flat in the water.

2. Did I mention crew? Well, in addition to the skipper the boat can carry two other crew members that shift positions in order to help balance the boat. Each crew person can move through six different positions, three on the port side and three to starboard. A crew member can also jump aft and sit on the transom to keep the nose up when the boat’s on a run!

To sail this boat fast, your crew can’t just sit there anymore. They’re going to have to move around and keep watching the boat’s performance while checking heel and pitch, just like on a RL Melges 24.

3. I guess that’s the last and biggest point I wanted to make here. It was pretty obvious from today’ beta that Qyv Nishan’s taken enormous care to make a virtual boat that looks and acts like the real thing! For example, although crew members can hike to balance the boat, they never actually extend beyond the toe-rail because that’s not allowed in Melges 24 racing. For the comfort of the race crew that go as far windward as they can, Qyv does provide padded lifeline straps… and those straps realistically give way as you lean on them! 🙂

Remember I commented above about the crew jumping aft to keep the bow up?Well, that’s no gimmick; it’s standard crew tactics on the RL Melges 24. It’s nicely implemented in the SL boat as well; as the sailor leaves her windward seat and jumps to the stern… the bow comes up out of the water! Nicely done, Quest!

OKOK, let me calm down here. 🙂 As I said at the start, today I only saw beta… and I can’t yet give you the usual pile of numbers I get from testing a new, production release. However, after 10 min. sailing with Qyv today, I was aching to know more. I can’t wait to find out how she might implement the asymmetrical spinnaker…
And Qyv? Doesn’t M-24 have a retractable bow sprint?
Grin.

Please, somebody pass me a Xanax while I wait for this sled to launch… 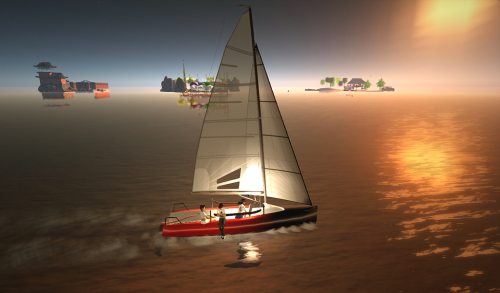