Yesterday Bennythe Boozehound treated sailors to a great concert celebration over at Nantucket Yacht Club -SL. Benny’s Woodstock lasted twelve hours, and was the product of  many weeks of effort compiling the Woodstock music and recreating the scene in Second Life.

It was all to support SAIL4LIFE, and wow, was it a success!

Although the music started at 09:00, many of us joined Orca Flotta in a mass cruise-to-Woodstock that took off from Triumphal Yacht Club at noontime. It was a sail-whatever-you-want cruise and, well… everybody did!

When Orca gave the word, a grand flotilla of sailcraft descended from TrYC into Bingo Strait and headed East to the party. All the green dots on the map above show that impressive armada as it moved towards Nautilus City.

The party was hosted by NYC’s Commodore Francois Jacques and co-sponsored by Charlz Price and Fiona Haworth from Triumphal. The location was high in the clouds over the NYC sim, and the event build showed much detail and care spent bringing a 1960’s ambiance to the festivities.

A crowd of roughly 40 people filled the grassy space in front of the main stage for nearly the full 12 hours, and most were dressed in sixties style! 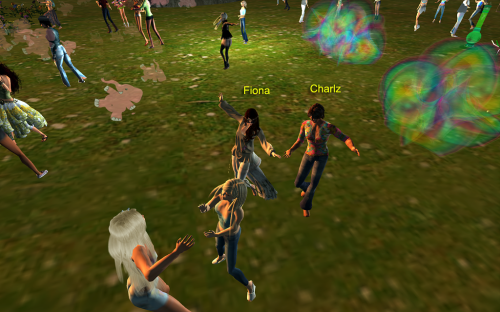 That’s Fiona and Charlz dancing in the picture above,  and below there’s a great shot of S4L luminaries when they took the stage later in the day (click to enlarge it). That’s Chad on lead guitar, backed up by Francois and Benny. Pippa was on the congas, Harry was playing sitar, and Silber and Aislin were backup vocals. 🙂

You can’t see her in the above view, but Fanci was on keyboards!

Sadly, as with any such large event, particularly one that celebrated the culture of the 60s, drug control was a problem during the concert. It was hard to protect SL music lovers from the disreputable influences of certain characters from the shady side of our community.

However, Beejee Boucher behaved himself, and spent most of the time dancing or smoking weed out of a large backpack full of joints. 🙂

The visual effects were pretty great, both on the stage and in the crowd. More than once I thought we were being griefed with mushrooms!

And it wouldn’t be Woodstock without rain! Thankfully there was less mud though, and no traffic jams.

The primary goal of the concert of course was to raise money for cancer research through the Sail4Life team, and the large crowd was particularly generous. There were two donation kiosks next to the stage, and by the time I left they were filled with over $L250,000 in contributions.

Fiona added another very nice donation touch. She had gardens of scripted flowers in front of the stage and on both sides. For a $50 contribution, you could send “a message of Hope” to someone special. There were many touching tributes, but toward the end in an effort to increase the donation totals, people bought flowers and sent Hope in many directions. After three dozen flowers, I ended up sending Hope to ‘Portuguese Water Dogs,’ ‘Ben and Jerry’s,’ and ‘Martha Stewart.’ Cate Foulsbane had the same problem; she dedicated one of her flowers to “My Swiffer Mop.” 🙂

Fiona told me the flowers alone generated an additional $L35,000 towards S4L!

What a great event it was!
Thank you to Francois, Charlz, and Fiona, and everyone else involved, but most of all:

This entry was posted in Sail For Life. Bookmark the permalink.

4 responses to “Kudos to Benny”