During 2008, I made several posts discussing SL upgrades to its Havok physics engine; one of those articles is reposted here. Well, since that time SL’s gone through several more server upgrades, and they’ve had variable impact on the sailing community.

However, this week a big upgrade was anticipated for both Havok and Pathfinder. Tasha Kostolany and Motor Loon wrote a great summary of this issue and how it could impact sailing. They predicted a ‘Hell Week‘ as the installation progressed sim-by-sim across the grid, beginning Wednesday or Thursday.

Well, thank the Leeward Cruisers for their wisdom planning this week’s cruise for a Tuesday night. There was a great crowd and a long, fast route. Very few boats crashed on the long way from Atanua to Knaptrackicon, and the party at DYC was pretty fantastic. 🙂

However, as Loon and Tasha predicted, Wednesday was another story. I was concerned about the upgrade, so as soon as I logged in Wednesday I went to ANWR where I usually test boats, and I rezzed a mesh Teleri.

Well, Loon and Tasha called it 100% right.  My boat was fine in the rez sim of Suffica, but as soon as I tried to sail south, I slammed into a brick wall on the ANWR border (see below left). After maybe five minutes trying to enter the sim, I sort-of succeeded (below right). However, I lost total control of the boat, the Teleri lauched skyward, and I eventually got bounced back to the prior sim. 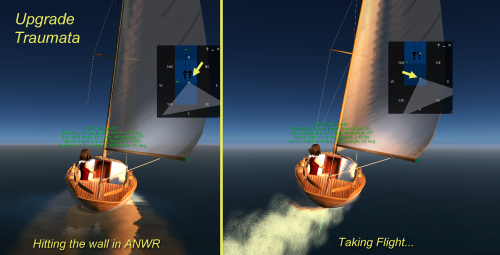 Sigh; ok. I understand this primarily effects Mesh boats and it will take time to upgrade the grid, but it wasn’t too healthy for the other sailor in the same sim with me either; she was sailing a Tetra 35 and turned green with nausea. 🙂 Hopefully with some patience we can all make it through this transition as it goes live during the upcoming week.

(Cough… anyone for golf?)