Yesterday I posted briefly about race buoy late-rezzing problems, and I mentioned one potential fix: increasing the physical size of the buoy by linking a large, underwater block to it. Today I sailed a series of hotlaps using the new, modified buoy in Trulan and it worked quite nicely. 🙂 The picture above shows my boat approaching Trulan sim, and if you look closely you can see that the buoy has already rezzed off the port bow, a full two sims distant.

Yesterday I also mentioned that this is not a new issue. Last evening I went back to the SLSailing.org archives and read a series of old posts on the topic. MarkTwain White suggested the same fix for late-rezzing buoys back in April, 2008; I think that could be the original post on the issue, and I cited the reference in my initial comment.

Going through the archives, I was reminded of two more potential solutions, and I thought I’d mention them here.

1. Raise the seafloor under the buoy.

In a private water sim, the owner can terraform a sharp peak directly beneath a buoy. That will not make the mark rez more quickly, but it will produce a permanent, easily recognized target on the world map and the mini map.

The 2008 SLSailing.org discussion I referenced above was actually about Svar Beckersted‘s fix for a late-rez buoy in USS’ Bartlett sim. Here’s what it looked like five years ago: 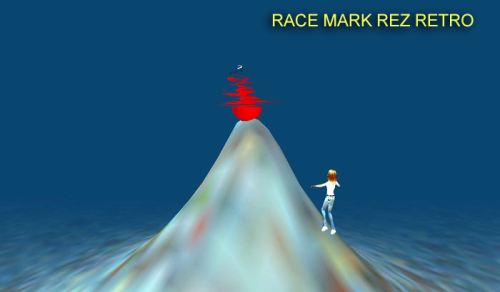 As I said, this fix doesn’t make the buoy rez faster or sooner, but it does make it show up on the map. To emphasize that point, here’s a low resolution chart of the USS sims from back then; you can easily make out the location of the “Bartlett Buoy Mound” (red arrow, below).

The 2007 ACA32 SL Regatta was held on a sixpack of private sims.

Even in that restricted space, sailors had some difficulty identifying the race buoys at a distance on the horizon. The solution was to place large, pancake-shaped objects above mast height over each of the buoys. That way the competition boats could easily orient to the mark locations, even when a landmass or another boat was in the way.

That solution worked well for ACA32, but it never really caught on for subsequent regattas. However, this topic gives me an excuse to post SurfWidow Beaumont’s great ACA32 video one more time; keep your eyes open for the race buoys in the vid, and you’ll see the large, dark pancakes overhead. 🙂

So in summary it looks like the race mark rez issue has been around a long time, and there are a number of ways to handle it. I also think it’s less of a problem these days, since many racing skippers use waypoint HUDs like TRAPNAV to highlight the race mark locations.