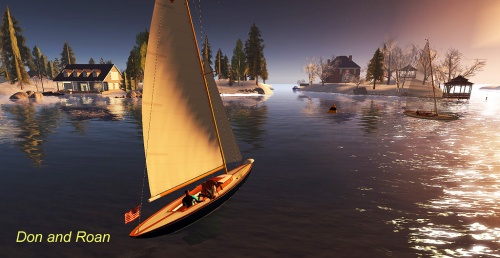 As you may know, Oracle Racing Team’s AC72 capsized in October and was severely damaged. Parts of the wing have been used in various ways, such as the Flugtag event in November where teams see how far they can launch eclectic flying devices into the water from a 30 ft. platform. And Jimmy Spithill, Oracle Racing Team Skipper, held a contest and gave away a piece of the wing to the person who best answered his question on how fans could help Oracle Racing Team proceed following destruction of their boat. Out of thousands of suggestions submitted, Jimmy selected Don’s and Don won the piece of the wing!

And FYI, yesterday was also the 3rd Anniversary of GGYC and Oracle Racing Team skippered by Jimmy Spithill winning the 33rd America’s Cup off Valencia, Spain.

Now I hope we get an update from Island Yacht Club‘s Dale Irata too!

Heres a poster to remind SL sailors of the ambitious, two-month long  “SL Vuitton” trophy regatta that Don successfully staged back in 201o. If you search back to that year, you’ll find MetaverseSailing.net has write-ups that detail many of the SLVT competition rounds; the match racing was rather great! 🙂

2 responses to “Don and Roan Update”