For quite a while, Tuesdays have been the primo day for routine maintenance and server reboots across much of the SL grid. It’s a good test of patience for boat owners. You can start your sail surrounded by a wide expanse of open water that stretches to the far horizon… but a few minutes later your waypoints ahead suddenly go gray, and end up inaccessible as regions reboot and update. The only real question is… How long can you hold your breath waiting for a sim to pop back up? 🙂

Well, perhaps it’s partly our fault too. Choosing to sail early on a Tuesday is like driving when the Weather Channel predicts a bad snowstorm. You’re just asking for trouble. 🙂 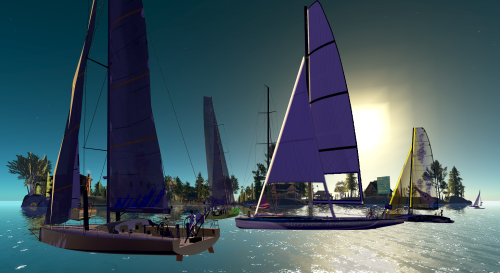 Those concerns never stop Joy Acker, however. She hosts a regular Tuesday long-distance big-boat race that’s scheduled right in the middle of that Linden Tuesday trash-pickup. It’s sort of like trying to play hockey when the Zamboni’s still on the ice… 🙂

Please don’t get me wrong, I’m not complaining! In fact, mega-kudos to Joy and Sailors Cove’s  Big Boats. With irrepressible determination a large fleet of hardy sailors routinely show up to race on Tuesdays, willing to battle the predictably inclement conditions. 🙂

Well, yesterday was one of those days again. Fearless, Jane, Rimmer, xPaulx, Joyof, and CharliePakk all showed up in Aegean sim sailing a motley assortment of Ocean Racers, including OD-65, RCJ-44, ACA33, my beta OP-60, and even a Nacra catamaran.

The hi-speed race got off to a laggy, bumper-car start, but the fleet quickly found their legs and took off for a long upwind/ downwind ride. Fearless had the best run, beating Jane by over a minute with Rimmer in the clean-up spot. 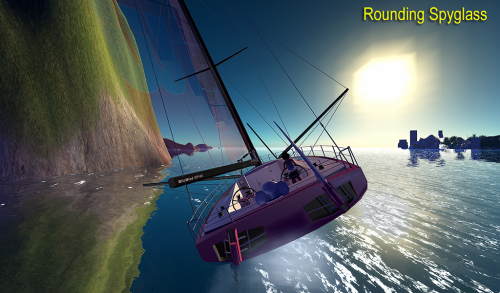 The second heat was more ambitous, but hubris has its consequences. Pretty much the whole fleet was lost at sea in West Blake, when the sim conditions  deteriorated. 🙂

I do want to give a shout-out to the SLCG, however. They found my boat several hours later, crashed on Fastnet Rock!

Despite the calamity, the race was much fun. So if you don’t mind crashing, join Joy next Tuesday when she does it all again. 🙂