I wanted to post a quick shout-out for the raceline in Debelox. 🙂

Debelox (outlined with a red square on the above map) is a Linden sim that lies at the West end of the water bridge connecting Corsica with Gaeta. From that location the Debelox raceline can support a number of long distance races and cruises over both continents.

The Debelox raceline is actually pretty unique. Debelox is a full sim, and the raceline is the only major object there. That means that the sim has a rather remarkable 14,962 free prim, with a corresponding low script overhead. The rez zone is also nicely sized, with a prim capacity of 1,274.

If you ever want to race Ernestinas, or just hold a rather massive fleet race, this is the line to use! It’s built to support all the boats, scripts, and sailing avatars you’ll need. 🙂

Hannelore Ballinger had some difficulty coaxing the line to ‘network’ this past Saturday for the Volvo racers, so I took that opportunity to update all the Debelox raceline stuff, including adding a new windsetter. The WWC is now in the Green Nun at the northern end of the line; that matches the default set up at nearly all the other Hay Ah racelines in SL. 🙂 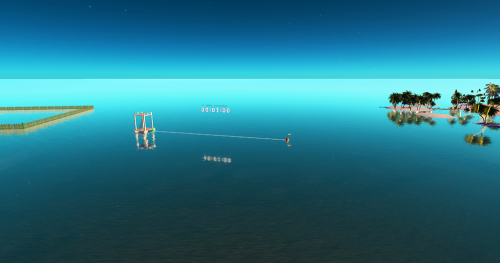