Several major changes are underway in the Nautilus region that might have a sizable impact on SL sailing. I’ve already discussed some of those issues here, including the widening of the Knaptrackicon channel that links the North and South waterways, and the associated expansion of DYC by Elbag Gable and RJ Kikuchiyo (full disclosure: I’ve been a part of that project too since 2009).

Although the Knaptrackicon waterway is important, it pales in comparison to several other projects that are just now playing out.

I’ve already commented about the changes at Sailors Cove. I think that most would agree that for a long time SC was the nicest place to live and sail in all SL.

I think we are all indebted to Patrick and Fanci; in large and small ways, they unfailingly enriched our lives. I’m sure I speak for all sailors, hoping Pat and Fanci can continue as part of this extended family as time and grace permits.

As Pat, Mark, and Nber announced, the ownership of Sailors Cove sims was transferred last week. In some cases sims were either removed, added or translocated. The new configuration could provide some benefits for the groups with particular interests (including pirates, mers, pilots, and sailors).

Here’s a map courtesy of Orca showing the estate and the owner breakdown for the transferred sims. 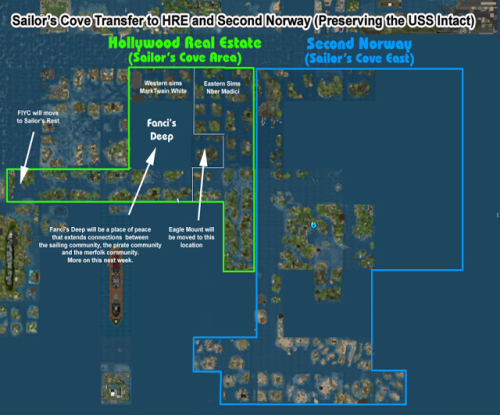 Here is another, high-resolution map that includes the names and locations of all of the United Sailing Sims and Blake Sea. It might help some RDs with chart formation. 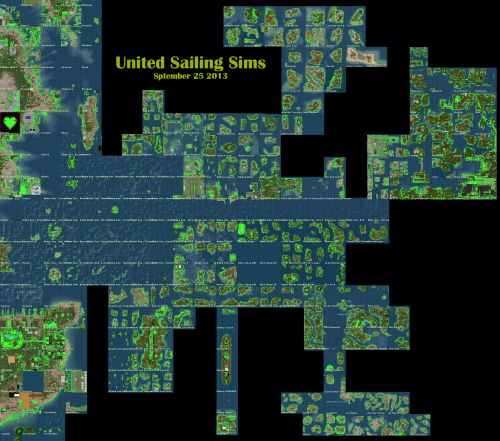 Rather remarkably, the changes in Sailors Cove were not the biggest news this week around Nautilus.

This week a score of new sims cropped up off the coast of Northeast Nautilus, linked to mainland through the Eastern coastal waterway.

The new sims appear to be Associated with the Irishestates group (now known as Sechelles Isles) under the leadership of Irishgent Resident. However, I need to be careful here because I’m not aware of any announcement by Lindens, Irish, or the estate group about this new project. Let’s wait and hear the details directly from them. However, this does give me an opportunity to offer a shoutout for Irishgent:

Many sailors will recall that Francois Jacques was a major investor in Second Wind along with Triumphal’s Charlz Price and Fiona Haworth. Their goal was to set up easily accessible ‘Learn to Sail’ centers across the grid for the benefit of… well, everyone. However, after Fran suddenly died one year ago, it became necessary to find new owners for many of the Sailing Centers that Fran helped underwrite. I posted about this issue and asked for sailors’s help. Irishgent was the first in line to my request. He was not interested in either the cost or the location; he simply respected what FJ had done, and was willing to do what he could to help.

At that time, others closely involved in the project also stepped in and Charlz and Fi decided to retain several of the parcels. It turned out Irishgent’s generous offer was not needed. However, his unselfish willingness to step up to the plate in FJ’s memory in support of sailing left a true, lasting impression with many in SL. Thank you, Irish.

Anyway, here’s an annotated map of the area under construction, with red arrows indicating points where the new simset connects with mainland water. Please don’t trust my map though; the day after I made it, one of the sims had moved to a new spot in the complex, and the land masses and content of many other sims were undergoing active change.

However, the map does show the relation of the estate to the other major waterways in eastern Nautilus. The simset merges with the Coastal Waterway near the Northeast outflow of Dire Strait. From that location it’s a quick sail North to Corsica, South to Blake Sea, or Southwest to Bingo Strait, Nautilus City, and Satori continent.

If you decide to go go visit, there’s a Linden rez spot in the SE corner of Loona in the coastal waterway adjacent to the connection. It’s a tropical sandy atoll designed by Silent Mole, and it nicely fits in with the island theme of the new estate.

A bit further south, just above the entry to the new simset, you’ll find Emin Marina. It has multiple, fun Linden freebies and an ample dock zone suitable for boat rezzing. It’s the work of Abnor Mole.  🙂

Once rezzed, you can sail from mainland Nereus sim across to Anse Etoile Isle in the newly attached complex. 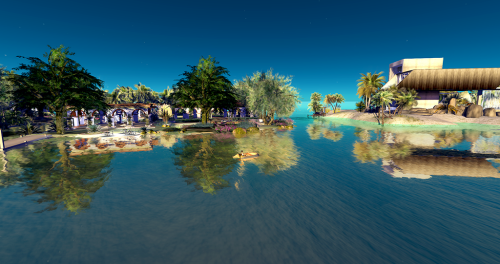 One there, you’ll find the various regions are quite detailed, and thoughtfully laid out with a coordinated, tropical islands theme.

Perhaps that’s no surprise. Ericaanne Hastings is an experienced, talented designer and builder in Second Life, and her influence is evident in the beautifully themed estate builds already installed.

Having said that, let me apologize again; this is a work in progress, and let’s wait for Irishgent to tell us the details. 🙂

When I started this post, I also planned to tell you what’s new in West Nautilus where Triumphal is rebuilding, and where Elbag Gable is revitalizing a large group of contiguous sailing venues. However, I’m running on too long here already, and I need to go sail!