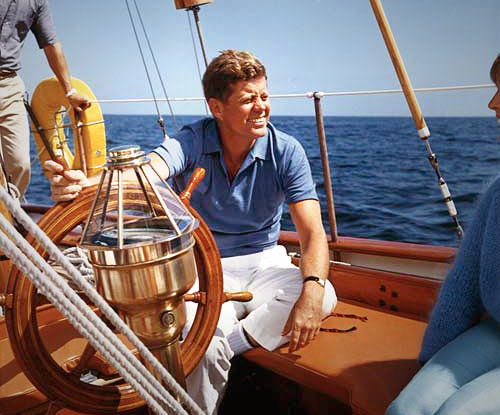 (Note: I want to acknowledge the websites and resources of Sailing Anarchy, YachtPals, the JFK Library, and several document databases. I found wonderful images and numerous docs that let me cross-validate fact details.)

This past November we observed the 50th anniversary of the assassination of John F. Kennedy, the 35th president of the United States.

A half-century ago, Kennedy’s administration was often termed “Camelot.” That nickname referred to JFK’s lofty aspirations for change, but it also stood for the dream team he recruited to Washington to help achieve his goals. (In contrast, it may be worth noting that the nickname for George W. Bush’s executive team was…  “The Vulcans.”).

In any event, JFK’s aspirations for a new global understanding in the early 1960’s  came to an abrupt and violent end by an assassin’s bullet on November 22 1963.

Since that time the image of JFK’s unfulfilled potential has grown to legendary myth, and today JFK remains an icon of a distant, pivotal decade. Our present, collective view of JFK is certainly clouded by time. Nonetheless, one theme resonates true for me, since it speaks much to JFK’s character: The 35th president was a life-long, serious sailor.

JFK’s first boat was a gift from his parents on his 15th birthday. The boat was a Wianno Senior  and it was named “Victura.” 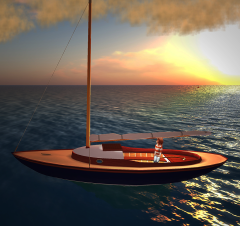 It was a gaff rigged, 26ft wooden knockabout design; a humble, multipurpose boat that also served as a local inter-club racer. To my eye the boat looks a hell of a lot like the 2008 SL Trudeau Knockabout sloop (although the Trudeau boat had a modern Bermuda rig). 🙂

JFK fell in love with his Victura ‘knock‘ and he kept it close in the family. Years later Victura was the boat he used to teach his wife and children to sail.

In fact, Victura still lives today. If you ever make it to Boston, Victura is up dry-docked and safe in a boat frame at the JFK Library. The wooden mast is stepped and the boat is fully rigged, waiting to launch.

JFK and his brothers were also avid sail-racers, primarily in Star class and Big-boat events. As a Harvard undergraduate, JFK and his older brother Joe Kennedy won the prestigious McMillan Cup, the oldest intercollegiate yacht racing competition in America. 🙂 After JFK became the U.S. President, the Harvard Crimson announced the 1962 McMillan Cup with typical dry humor:

“The Harvard Yacht Club opens its spring season by participating in the Annual McMillan Cup Regatta, held at the Naval Academy. Two races are scheduled for Saturday on the Chesapeake Bay and one on Sunday. … “This event has been won in the past for Harvard by such well-knowns as George O’Day, gold-medal Olympic winner in the 5.5 class, and one John F. Kennedy, better known for his touch football prowess. …”

As President, JFK was never far from sailing. Although he inherited a 92 ft presidential power yacht from the Eisenhower administration, it’s no surprise that Kennedy preferred a sailboat.

Soon after he came to Washington, JFK worked with the Coast Guard Academy to fit out a Marconi-rigged Sparkman and Stephans yawl named Manitou (62ft LOA, 44ft LWL) that served as the “Floating White House”  for the remainder of his tenure in office.  🙂

JFK’s presidency managed a series of epic issues that helped define the 20th century. Perhaps the most serious was the Cuban Missile Crisis, a confrontation that could have easily escalated into global nuclear war. (Perhaps it goes without saying that a nuclear war would have been bad for sailing.) 😦

Remarkably, Kennedy and Khrushchev had the wisdom to reject  much of the “expert” advice of their own military leaders who promoted the conflict. The details are well-described by Defense Secretary Robert S. McNamara in Errol Morris‘ Fog of War. Here’s an exerpt:

JFK and Khrushchev were on opposite sides of the world physically and  philosophically, but they were able to reach a joint consensus in the midst of crisis. They stepped back from the widening abyss that emerged before them. 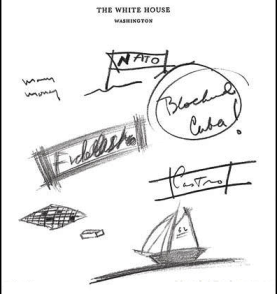 Fifty years after that apocalyptic moment, many are now commenting on these past events, and honoring JFK’s legacy. Pundits keep trying to distill in prose the special qualities that defined JFK’s greatness and leadership.

For me, it’s not that hard. After all, JFK was a sailor. 🙂 Sailors are used to responsibility at the helm, and they know the need for courage and clear thinking in the face of stormy seas. JFK’s personal doodles perhaps reveal how important sailing was to him. Sailing was more than a physical challenge; it was also a guiding metaphor for his life. Take a look at the thoughtless sketch in the figure above-right. Kennedy scribbled the  note while in conference during the nuclear crisis in 1962. At the bottom of the drawing, JFK included a picture of his knockabout, Victura. To me, the sketch shows Kennedy’s animus at the helm as he tries to beat windward through a sea of truly horrific obstructions.

Dear Bob,
The Victura sails well in gentle breezes and stormy seas, and it meant so much to the President and Bob to have you there.
With Christmas love
Ted

As we all know, John F. Kennedy was assassinated by a sniper’s bullet in Dallas, TX on November 22 1963, a year after the Cuban crisis.

The night before his collision with history in the city of Dallas, JFK landed in Houston. Kennedy slept at the Rice Hotel, and left early the next day for the short plane flight to Dallas.

The hotel staff discovered another doodle that JFK absentmindedly left on his bedside night-table.

That last pencil sketch was a again a small sloop; some think the sloop is Victura. I’m not so sure on that point, though; the drawing lacks sufficient detail to tell.

However it hardly matters, since the doodle clearly show2s that JFK’s last thoughts were once again focused on sailing.

Kennedy faced a difficult reelection campaign that year, and he was en-route to tour a contentious state that held many electoral votes. It’s therefore perhaps no surprise JFK took a personal moment to inhale strength from his experience as a sailor.

JFK was the U.S. captain, and all the responsibility rested on his shoulders. In a short, highly contentious interval of history, he was one of the rare few with the knowledge and experience to confidently take his nation’s helm. He was a sailor; that’s what sailors do.

It’s no surprise the U.S. Intercollegiate Offshore Big-Boat trophy became the John F. Kennedy cup in 1965. I guess it’s also appropriate that Fair Harvard sailed to win the first Kennedy Cup, and that NAVY won the second. Since then, however, it’s all been up for grabs, and Cal Maritime is the recent offshore powerhouse team!

Let me end this short tribute with Kennedy’s comments from the 1962 Americas Cup regatta. His words were genuine, inspirational, and fifty years later, they still ring true:

“I really don’t know why it is that all of us are so committed to the sea, except I think it is because in addition to the fact that the sea changes and the light changes, and ships change, it is because we all came from the sea. And it is an interesting biological fact that all of us have, in our veins the exact same percentage of salt in our blood that exists in the ocean, and, therefore, we have salt in our blood, in our sweat, in our tears. We are tied to the ocean. And when we go back to the sea, whether it is to sail or to watch it we are going back from whence we came.“ 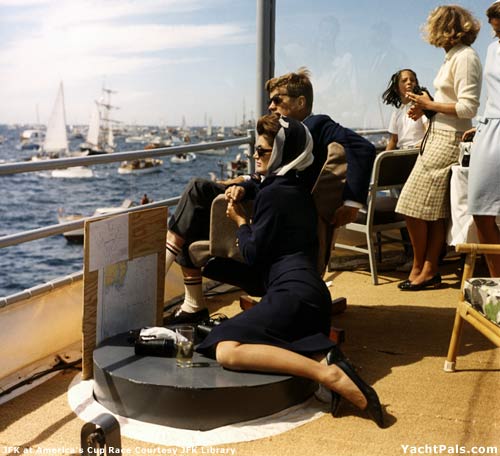