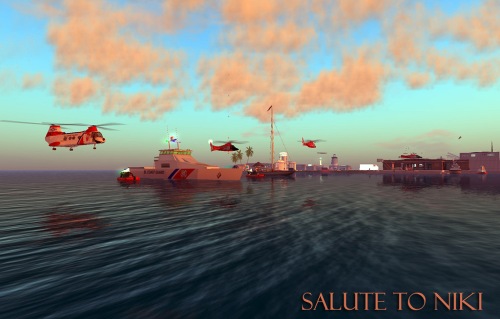 I cried a little while I sailed last night.

I don’t normally get to spend time in world on a Saturday night, and it was sheer luck that I was there to catch the message broadcast on the SL Coast Guard channel: The SLCG Cutter Niki Writer was about to take its maiden voyage from Santa Catalina. Instantly a number of emotions flowed through me: a sense of appreciation, loss, pride, and love.

I felt a great sense of appreciation for this very thoughtful act of the SL Coast Guard.  It is my understanding that the Coast Guard names craft after great women who have passed away.  Seeing Niki’s name on the back of that cutter showed how much she touched people’s hearts in our sailing community, and it was an amazing gesture on the part of the SLCG to recognize her like this.

I knew Niki … not as well as some, but I called her a friend.  She helped me when I needed support making graphics for the Fruit Islands Yacht Club.  She did amazing work.  I later realized that she was having issues with rent in SL, but she had never asked me for a single L$.  She was a great person, and at the mention of her name, I felt that sense of loss again.

Ranger Upshaw took the helm of the cutter that night, and led an impressive flotilla of SLCG air and sea craft away from the docks and out into Blake Sea.  They were kind enough to allow me to tag along, and I sailed a black J-Class alongside them.  More than once I had to lower sails and wipe my teary eyes as we made our way around the perimeter of the Blake Sea.  I was so proud to be sailing alongside this magnificent group of sailors and aviators in this touching tribute to our lost friend.

As the flotilla headed back north from Arabian, I was forced to tack west away from the group as they headed to Santa Catalina, and when I rejoined them in Blake Sea – China, they were lining up for a tribute salute before returning to dock.   I was invited to join the group for a commemorative photograph, and proudly (trying not to hit any helicopters with the mast of the J-Class) lined up with them for the salute.

It really came home for me what a true community we have in SL sailing.   It was a powerful, wonderful act on the part of the SL Coast Guard, an organization for which i have ultimate respect.

I am proud to be a supporter of the SLCG.  There is true love here, and this tribute to Niki was a beautiful expression of that love.

I am proud to be part of the SL sailing community.

New ONE: Trudeau One v1.13b released

A few days ago I talked about a minor racing glitch in Trudeau ONE. When a T-ONE v12.x strongly heeled (usually on an upwind beat with wind speed equal or greater than 9.0m/s), the boat’s Speed-Over-Ground sharply deteriorated. There’s nothing wrong with that actually, since heeling impairs sloop propulsion in RL too, for several reasons.

However, in T-ONE v1.2x  several skippers pointed out that a sailor could overcome the heel effect by ‘waggling‘ the tiller back-and-forth. That maneuver appeared to counteract the heel effect on the boat, allowing ONE to accelerate. An analogous problem was previously noted on Fizz 2.x and other boats. The ONE waggle problem was rather obscure, but was nonetheless a potential exploit a skipper might use to win a tight race.

Let me emphasize that I doubt skippers would actually use that ‘waggle’ trick. The sailors who complained the loudest were among the most involved, winning skippers: Armano, Chaos, Joly, and others. They were all excited about ONE, but also wanted to eliminate any possible script exploit that could give a boat an untoward racing advantage. They wanted realistic T-ONE races where they could win fair-and-square. (Please give them a round of applause for that!)

I’ve no intention to speculate on the script issues underlying the little ‘waggle’ glitch; I’ll leave that to others. However, I did spend a lot of time chatting with sailors (mostly Armano and Chaos) and testing out waggle issues. Most sailors feel the waggle-boost in later versions of ONE is small, and race-insignificant. Nonetheless, I think it’s pretty exciting that Trudeau Yachts took the issue seriously and just released a new update… ONE v1.13b… that fixes the problem beyond everyone’s satisfaction.

I’m sure there will always be a flood of suggestions, and many passionate opinions about boat issues in SL. I also appreciate only a few such issues will prove valid or serious enough to merit an upgrade…

But WOW, thank you to Trudeau Yachts for taking the time and attention to consider user issues and appropriately respond where they think it’s indicated.

Actually, that’s not the full point; please let me restate that:

Thank you to J. Trudeau for understanding and appreciating how many people in SL are trying to really sail your boats. The Trudeau Line keeps gets better and better, and a polyglot fleet of polished skippers are standing on RL and SL docks around the world, smiling broadly in appreciation.
Thanks! 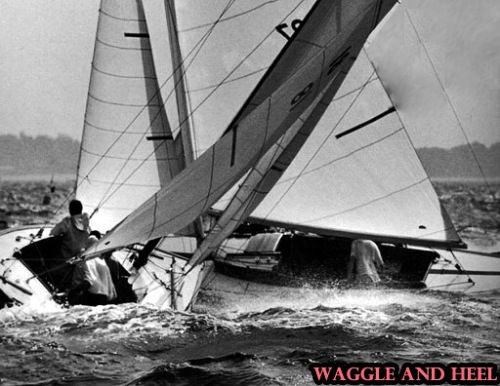 During the  1930’s Depression decade, Shields was dismayed at the massive cost of America’s Cup contenders, and the inherent bias that financial advantage gave certain teams. Shields wanted a new boat that any sailor could afford; one that could offer a level playing field and one  skippers could race often. Millionaires and high school students were welcome to belly-up on a race line and go toe-to-toe with each other; all any sailor needed was a genuine love of sailing, and the gut-level determination to ‘raise sail.’ The more sailors who showed up, the better.

T-ONE  continues that vision. It’s truly innovative in design and very easy to sail, but not so easy to sail well. 🙂

Recently a number of sailors, including Armano Xaris, Joly John, Chaos Mandelbrot, identified a potential race-performance problem in the current T-ONE v1.12.  ‘Waggling the tiller‘ while the boat is strongly heeled will increase the boat speed. The effect is not huge, but it’s certainly enough to interfere with race performance under unusual conditions.

Let me be more specific.  Based on my own experience as well as multiple tests and discussions with other sailors, if you sail T-ONE v1.00-1.12 in a strong breeze (RWS 9.5 m/s or greater) and hike leeward to  increase the boat heel, T-ONE will typically complain, and the boat will slow down. That’s pretty realistic; the same thing happens in real life, since sail and hull performance suffers when a sloop heels excessively.

However, here is the problem: If T-ONE stalls in strong wind with the boat tilted at a fairly nauseating angle… an SL skipper can waggle the tiller back-and-forth to get going again. The waggle affect appears to counteract the heel angle and improves sail performance. Let me show you an example.

In the figure below I sailed downwind using intentionally bad settings that exaggerated heel; the Wind Speed= 9.5m/s, AWA= 156-158, the skipper hiked to Lee, and sheets were  0-10°. Under those severe heel conditions, big wind and terrible sheet/ hiking, T-ONE nearly stops dead in the water as shown in the bottom image of the Figure (boat speed= 0.1 m/s).

That’s actually no surprise; the adjustments I set were intentionally terrible.

However, now look at the image on top!! In that frame I am ‘waggling’ the tiller back-and-forth, about once each second, with everything else the same.  Wow, the heel angle is less and the boat speed quickly increases to 1.3 m/s, a rather huge improvement!!

This ‘Waggle Effect‘ is not selective for any particular heading. If you look below, you can see the same waggle induced boost for a boat traveling upwind. The Right side of the Figure below shows a T-ONE sailing a heading of AWA 40° with an RWS of 9.5 m/s. The boat appropriately heels in the stiff breeze, and the heel effect is accentuated because the skipper is sitting on the Lee side (aka the ‘wrong’ side). Under those conditions, the boat speed is only 1.3 m/s.

Now look at the Left Frame below. Under identical conditions, if the skipper waggles the tiller T-ONE quickly uprights and the boat speed accelerates to twice the non-waggle state.

Many old SL skippers will recall a similar, tiller-propulsion problem in the Fizz 2.x that came up during Fizz Cup 2008; a few sailors in that regatta used waggle to gain advantage. (note: to my knowledge however, no sailor did that deceptively; they were just taking full advantage of the Fizz sailing script under the Fizz Rules.)

That troublesome waggle-glitch in Fizz Cup 2008 was quickly fixed with a mid-regatta boat upgrade. My point is just to say the ‘Waggle Effect‘ is nothing new…

But let’s get back to T-ONE:

The current ‘waggle problem’ in T-ONE only occurs under conditions of strong heel. It’s an issue only a serious racer might notice, and it’s likely irrelevant under most race conditions, for the following reasons:

Tiller waggle is a pretty minor item, I admit. However, Trudeau Yachts already has a fix for it, and I understand the fix will be part of the next automatic, free update.

When it first launched, I commented that T-ONE was a ‘paradigm shift…‘ a true, innovative benchmark in SL sailing.  In many ways the little raceboat marked a genuine advance in the accuracy and realism of SL racing.

In that context, it’s now fun to smile and watch as J Trudeau makes tiny tinkering adjustments to sailors’ comments… turning a ‘wonderful‘ boat into something truly ‘sublime‘ to sail.

Posted in Racing, Sailboats, Trudeau One