Teleri Gets an Update

Six weeks ago I posted about Craig Ktaba’s new racing sloop, the Ktaba 20 Teleri MX. The boat’s modeled after the International One Design Class, and it’s fully compliant with the wind, wave, and current parameters from raceline windsetters. The boat has many features that show the builder’s attention to detail and his emphasis on a realistic sailing experience.

With that kind of dedication, I guess it’s no surprise that Craig is already back with a new Teleri update! I’ve posted the full Owner’s Manual here, but let me list a few of the new features added since my original review:

— The Teleri is one of the few boats in SL that lets crew help sheet the sails. A new ‘controls‘ command lets the skipper decide whether crew should have that job or not. 🙂

— The original Teleri had a strong weather helm, but the new boat is more evenly balanced. It still pulls to weather (as it should), but the effect is more a ‘gentle nudge’ than a ‘hard tug.’

— Teleri also has new camera control options, including a ‘follow cam’ that enhances a skipper’s situational awareness in a race.

The Teleri’s performance curve got a tuneup; the new numbers should make it more true-to-life while also enhancing the boat’s ease of use. The chart below shows a plot of boat speed as a function of wind angle using a wind speed of 4.86kt. That light wind was chosen to simplify the measurements, but the shape of the curve should help sailors predict boat performance at higher wind intensities.

The chart shows the Teleri is still quite speedy. The blue curve shows Boat Speed vs Real Wind Angle (RWA); Teleri’s maximum speed occurs on a beam reach, and it tops out at >90% RWS (Yikes that’s fast!). The dotted line above in red also shows Boat Speed plotted against Apparent Wind Angle (AWA). This view reveals a near-linear speed decay at progressive downwind headings, and the curve is reminiscent of the Trudeau Twenty family of boats.

The new Teleri update has spinnaker options that seem a fair compromise between realism and ease of use. A skipper can only raise the spin when the boat heading is close to a dead run (over AWA 145° or RWA 160°). Once inflated, the spin adjusts automatically, although a sailor can use keystrokes to manually fine tune it. 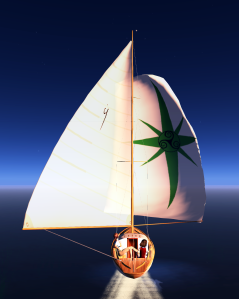 As shown in the purple curve (Spin) on the above chart, a well-tended spinnaker can add as much as a 50% boost to a downwind run. However, as the boat speeds up or changes heading the AWA will quickly rotate windward and the spinnaker will collapse! If you try to sail with a deflated, noisily flapping spinnaker, all those potential benefits of a large head sail become penalties and the boat speed dramatically drops.

Winging the jib is a safer option on downwind tacks over RWA 130° (shown in green on the chart); it gives a more modest boost to performance. 🙂

Nearly all sailboats in Second Life ‘auto-gybe’ to real wind headings. In other words, when the wind shifts from one side of the boat to the other the boom swings over, and the boat begins to heel towards the new lee side.

However, in RL things are not that simple. When a sloop makes a downwind gybe, the wind force is coming from the stern and the pressure of the wind keeps the boom from swinging over. This effect is modeled in the Teleri, as shown below.

The image on the left shows a boat on a port tack with a Real Wind Angle of 169°. With a small course correction the boat then crosses the wind, ending on a starboard tack with RWA= -169°. Since the breeze is still coming from behind, the boom stays stuck on the ‘wrong’ side.

To flip over the boom in Teleri, you’ll need to do what sailors do in RL: either tack further windward, or pull in the sheet until the boom swings over by itself. 🙂

To my knowledge this is the only boat in SLSailing that has this realistic feature.

The new update includes a host of additional features I haven’t mentioned above, but I’m pretty sure they’ll make seasoned SL racers smile. To give you the details, I’ve posted the full user’s manual online. Once you get bored reading all that stuff, stop by Triumphal Yacht Club, where Charlz Price just set up a free Teleri demo dispenser, and try it out for yourself! 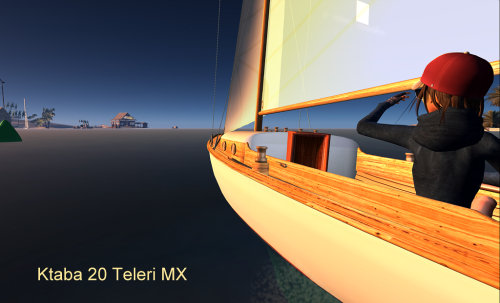