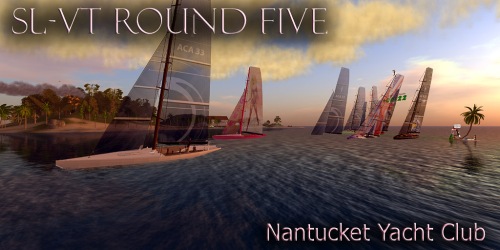 Woots!! Round Five of the SL-VT ACA33 Regatta Series will be at SL-NYC. Here’s Gemma Vuckovic’s Notice of Race!

Please use the on-line spreadsheet for your Entry

Alternatively just send Gemma a notecard stating your preferred start time slot 🙂
The slots are: 6:00am, 10:30am or 4:00pm.
Last date of entry is Thursday 8th July, (and late entries will not be accepted!).

There will be 3 or 4 time slots, depending on the number of entrants, on Saturday 10th July – 6am, 10:30am & 4pm
Entrants should select one round/time slot that they wish to compete in.
Time Slots will be filled on a strictly first come basis.
Each Qualifying Time Slot will consist of a series of races in a group of 4 competitors maximum.
Each Competitor will compete in a “one against one” format against the other Competitors in turn.

Scoring – the winner in each race will be awarded 1 point.
The competitor, in EACH time slot, with the most points will progress to the Finals on Sunday 11th July 8.00am.
Ties will be determined by one additional race, where ALL tied competitors will compete.

The first and second placed competitor of this 5th round event at NYC will proceed to the SL VT TROPHY FINALS , to be held in early August.

i. The 2010 SL-VT Trophy Round 1 will be governed by the Racing Rules of Sailing in Second Life or RRSSL. In addition to these ISAF Rules 12 and 17 will be in effect.

ii. The applicable Racing Rules of Sailing are as follows:

Rule 12: ON THE SAME TACK, NOT OVERLAPPED
When boats are on the same tack and not overlapped, a boat clear astern shall keep clear of a boat clear ahead.

Rule 13: A boat has no right of way while tacking.

Rule 16: When a right-of-way boat changes course, it shall give the other boat room to keep clear.

Rule 17: ON THE SAME TACK; PROPER COURSE
If a boat clear astern becomes overlapped within two of her hull lengths to leeward of a boat on the same tack, she shall not sail above her proper course while they remain on the same tack and overlapped within that distance, unless in doing so she promptly sails astern of the other boat. This rule does not apply if the overlap begins while the windward boat is required by rule 13 to keep clear.

Rule 18: When overlapped, inside boats have right of way at marks, NOT including starting line marks.

Rule 19: A boat approaching an obstruction has right of way to tack or gybe.

— A Protest must be shouted.
— In the event of a protest, the umpires will rule the protest valid or not. The protested boat will then have to do a 360-degree turn before finishing the race. Failure to do the penalty turn will lead to disqualification for the race.
— Avoiding Contact. A boat shall avoid contact with another boat if reasonably possible. However, a right-of-way boat or one entitled to room
(a) need not act to avoid contact until it is clear that the other boat is not keeping clear or giving room, and
(b) shall not be penalized under this rule unless there is contact that causes damage or injury.

(c) For purposes of right-of-way rulings, “damage” shall only consist of incidents which fuse prims, eject crew, lose the race wind, disrupt physics continuity, or impair the functionality of a boat’s script sufficiently to require a script reset.
— A boat shall start racing (raise her sails) no later than 15 seconds after the beginning of the starting sequence and shall not lower her sails or moor until she finishes or retires.
— Do not touch (i.e. edit) other boats; do not edit your boat after starting.
— At the discretion of the race director, attempts to “game” the rules can lead to disqualification. Gaming the rules is loosely defined as using the ruleset to violate the fundamental purpose of the ruleset. The purpose of the ruleset is to keep boats sailing competitively and “safely”, not provide opportunities to win by other means than excellence in sailing skills.
— Good sportsmanship is more highly regarded that the ability to win at any cost.
A boat and her owner shall compete in compliance with recognized principles of sportsmanship and fair play.

3 responses to “SL-VT Round Five: NYC”