On April 16, with a big smile Charlz Price and Fiona Haworth downsized for the day, and turned the keys to Triumphal Yacht Club over to Tiny World Regatta 2011. Chaos Mandelbrot chaired the “minor, low-brow” event, 🙂 and with Orca Flotta’s help turned the OrCafe into Tiny World Headquarters, sponsoring a nonstop program of music, racing and cruising that ran from dawn to dusk!

When people weren’t dancing, they were on the water sailing. The competition events included separate morning and afternoon fleet races, designed for the convenience of sailors in different time zones. Between the aquatic hot-rodding sets, Kittensusie Landar and Leeward Cruising Club took center stage. They orchestrated a distance, mass cruise that launched from the Schiffsratten docks in Pslande. The fleet sailed through Dire Strait and passed by DYC in Knaptrackicon to re-enter Bingo enroute to a landfall back at Triumphal! It was great fun, and BennyThe Boozehound piped through his soundtrack all along the way. It was a “Tour-de-Force” of truly tiny proportions. 🙂

Oh. I forgot to mention one of the best parts!

Triumphal’s owners Charlz Price and Fiona Haworth provided everyone with TrYC Tiny-compatible racing and cruising sailboats! The boats are actually pretty great, so go over to Triumphal and get one. They are powered by the BWIND engine, and are very nicely (and thoughtfully) detailed. The boats will carry two sailors and they have adjustable textures and sit positions (so your Tiny can see over the cockpit). The TrYC cruiser/racer even comes with a spinnaker!

This was my first acquaintance with Charlz and Fi’s club boat; it turned out to be easy to use, very stable and quite speedy, as the first group of racers discovered on Saturday morning. That 8:00am timeslot had a packed house with five sailing teams on the startline. Despite the crowd, the weather proved perfect for sailing, with no noticable lag.

The Regatta used the ISAF standard low-point scoring system with one discard. Under those rules (and probably under any other), Aislinn Farella emerged the undisputed 8:00am winner with three First Place finishes! Lothor Vlodovic had two Firsts, and earned Second Place. He sailed a super series, ending a single point behind Aislinn! Nice job! Here are the numbers: 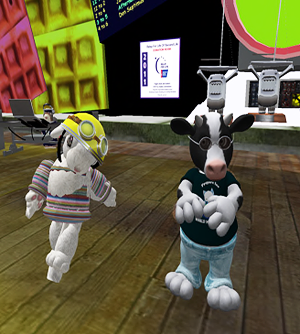 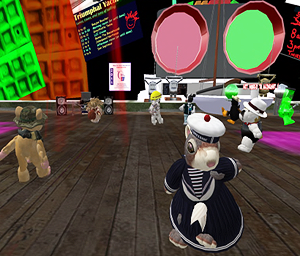 The afternoon races were just as great!

Joro Aya spent the morning session judging, so by 3:00 pm she was hot to sail, and ready to roll. Joro quickly mastered the Regatta Raceboat, jumping ahead of the fleet and winning the Start in nearly every heat. When the salt-spray settled, the scoreboard showed Joro had grabbed four First Place wins out of the total of five events.

Woots, Even under the day’s Small Circumstances, Joro had the right stuff, ending up with a perfect low-point score of “4.” Don Berithos and Gemma Vuckovic trailed Joro at a distance… and Gemma came away with the Second Place showing.

Woots! Nice racing everybody! Here are the details: 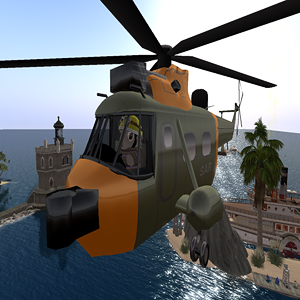 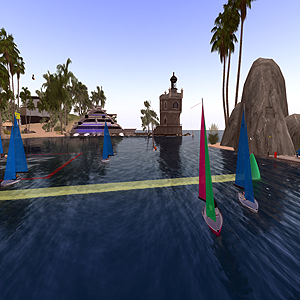 For such a small event, Tiny World ended up pretty wondrous. 🙂 On Saturday TrYC was chock-full of happy, funny people who were dancing, sailing, and cruising their weekend away. So Please give a huge, much deserved hug and sound loud applause to the great team that put it all together: Chaos, Charlz, Fiona, Orca, and Kittensusie. WOOTS!

I don’t know about you, but my personal criterion for a ‘Regatta well done‘ is pretty simple. A sailing event is a success if somebody comes up and says: “Hey, that was fun; let’s do it again tomorrow!” 🙂 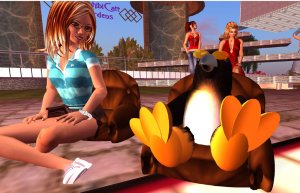 Well… the day after Tiny World, that happened big-time.

On April 17, a rather huge fleet of sailors descended once again on the Triumphal race waters for a Sunday Leeward Cruise. This time however, Kittensusie Landar and Francois Jacques set the destination to Chaos Mandelbrot’s home dock at Wicked Good. 🙂

A truly sim-busting crowd made landfall there, and all joined-in once again, thanking that Penguin for a Tiny job… but a job done HUGE! 🙂 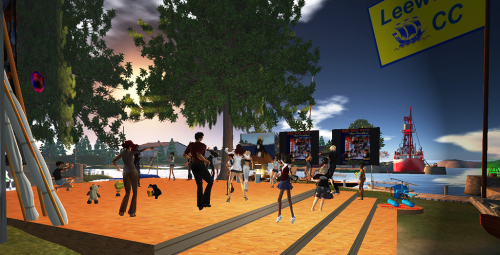