Danshire Yacht Club Gets a Makeover

I wanted to take a moment to give a huge shout-out to Elbag Gable and RJ Kikuchiyo for their wonderful help expanding and remodeling Danshire Yacht Club in Knaptrackicon.

Knaptrakicon sits in the middle of Nautilus between Bingo Strait and Dire Strait, and it includes the major channel that connects the North and South waterways for the linked continents of Nautilus, Gaeta, Satori, and Corsica. That makes Knaptrackicon a rather critical gateway for many who sail there. Click on the map above, and you’ll see what I mean.

In an effort to keep at least a narrow channel open, in early 2010 Tig Spijkers and I moved Danshire Yacht Club down to Knaptrackicon. When several more parcels went on sale there soon after, Elbag Gable joined in and picked them up, widening the waterway for all sailors to use.

The image to the right shows the channel and builds as of May 2010. The waterway is open and easily navigable, but there are still small builds on either side of the canal that make it difficult for more than one boat to pass at a time.

Well, that’s changing pretty quickly now! A few months ago, Elbag made another wonderful gesture, buying up several of the remaining parcels in the sim and deeding them through DYC to improve sailing. It was now possible to widen the channel, re-terraform the western half of the sim, and give the DYC builds a “fashion makeover.” 🙂

That’s where RJ Kikuchiyo stepped in and took over, completely redesigning the space to give it a consistent, classic Northern European theme. RJ is a truly legendary maestro of maritime architecture in Second Life. Although the work is not yet complete, the new additions are strikingly beautiful, detailed and true, reflecting both RJ’s artistic vision and his knowledge of maritime history. Please stop by and take a look, and ask RJ about it!

Quite a few sailors did stop by DYC this past Tuesday; the Leeward Cruisers celebrated  Chaos Mandelbrot’s Seventh Rez Day! 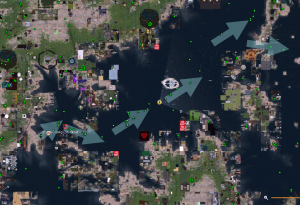 The cruise route for the day left DYC  and swung up through Dire Strait to Fedallah, before turning Southeast to cut back into Bingo Strait.

If you click on the map to the right, the green dots will give you a sense of  the size of the fleet. Early in the sail, boats were strung out all the way from DYC to the ends of Dire Strait! 🙂

As usual, the cruise was full of fun sailing and flat jokes, and Bennythe Boozehound’s music selection kept everyone pretty excited all evening. It was a great way to break in the new dockside dancefloor at DYC! 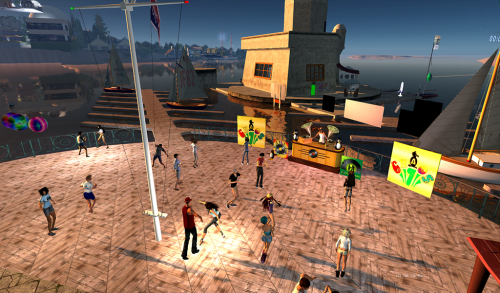 5 responses to “Danshire Yacht Club Gets a Makeover”