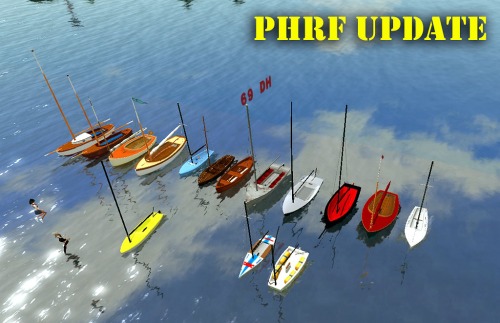 April 9, 2010, J-class. This was my first time on the 2010 PHRF course with the J. Sim conditions were poor. Fractal came to a dead stop 3 times. Twice due to sim conditions. The third time was hitting a shoal just W of Indian rock. This course does not show off the J-class speed. The reaches are not at the optimal J-class angle. I suspect much slower boat speeds on this course than the previous PHRF course.

Thank you for your comment, Chaos! It’s about time I updated PHRF stuff!

In case anyone is unfamiliar with it, the PHRF Handicap project collects solo lap data from skippers who sail a simple, classic ‘test course.’ The results are automatically uploaded to a web database, and the data is then statistically filtered and pooled to determine an ‘average, good’  lap time for each class of boat under under the test, fixed conditions. It’s easy and it’s fun, and any skipper can try it out any time they want, in any boat they choose. Since everything is always the same, sailors can use the Madaket course to sharpen their skills, try new things out, and document the changes over time. 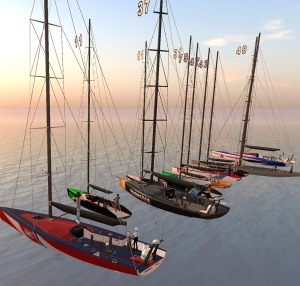 Those efforts generated a few thousand ‘valid lap score’ entries. That robust database makes it possible to calculate ongoing valid and reliable ‘handicap factors’ that compare  the average performance of different boats that sail in SL. I posted the most recent handicap update in November 2009; that post includes a bibliography of many prior articles that discuss the handicap system, and should answer just about any question.

For most of 2009, the PHRF course started in Madaket and followed a route that included equally-sized beat, run, and reach legs, using the buoys in Cannonade and Flotsom as marks (see the charts below). On January 3, 2010 however, the Cannonade yellow mark moved to Howser; that forced an official close to the 2009 PHRF test course. Actually, that was no big deal, given the large amount of data already collected; it was time for a new course anyway!

The new “PHRF Hotlaps 2010” course uses the rock in north-central Indian sim as the upwind mark; it stretches the upwind/downind leg an extra twenty percent or so. It also does something a lot more important; if you look at the 2009 course below, it has two “Reach” legs from the yellow mark to green, and then back again. Those two tacks on the 2009 chart are beam reaches, and they only test performance on a single  boat heading. M1sha Dallin pointed this out many months ago, and I think she’s right, the course could be better.

The new ‘2010’ course shown below fixes this problem, at least to a small degree. The angle between Indian Island and the Green Mark turn those legs into a close reach and a broad reach, and hence make the course — potentially — a better test track. Having said that, I must admit that every course we tried over the past two years produced near-identical performance rankings, evidence that the results are valid, reliable, and ‘portable’ to other courses. 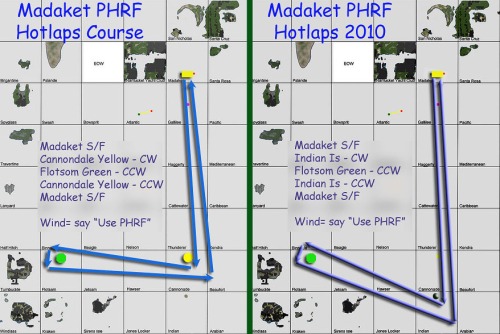 Chaos stated above: “This course does not show off the J-class speed. The reaches are not at the optimal J-class angle. I suspect much slower boat speeds on this course than the previous PHRF course.”  I admit that Chaos may well be correct, the new ‘2010’ course might not be ideal for J-Classic.  In fact, I hope it’s not; that’s not the intention.  The PHRF course is just intended as a simple, quick, and ‘fair’ test of  a boat’s basic sailing performance. It shouldn’t be tuned to the advantage of any particular boat.

Having said that, let me get back on topic here and post the ‘final’ update on PHRF scores for the 2009 course; the summary table below includes handicap adjustments based on all valid laps sailed prior to the switch on January 3, 2010:

The left column lists the name of the boat, and the second column lists that boat’s ‘average good lap time’  for the 2009 PHRF course shown above. To generate a simple performance handicap score, two years ago we chose the ‘Trucordia Yawl’ as an index boat, since it was popular and its lap speed was in the middle of the pack. A given boat’s ‘handicap’ was defined as a simple ratio: [Yawl Average Good Lap Time] divided by [Test Boat Average Good Lap Time]. That ratio repeatedly demonstrated that a boat like the Tako was 30-35% faster than the index Yawl, while the Trudeau Tradewind proved 47-55% slower. The 2009 handicaps are listed in blue in the third column, and the fourth column shows the 2008 handicaps, where available.

The latest summary numbers above don’t show any new surprises. That should be reassuring, and actually pretty consistent with sailors’ predictions.

For example, I commented many weeks ago that the Trudeau Columbia handled much like a J-Class, with a few extra features thrown in.  The latest numbers reveal a J-Class handicap of 1.00, while Columbia scores a 0.99.   I’d say that was pretty close!

I think I’ll stop commenting there however, because I still have a few months’ worth of  numbers to look at, based on the new ‘Hotlaps 2010’ race course. But before I can post those scores, I think it’s important to change the index boat!

As I mentioned above, for two years I’ve been comparing everything to a Trucordia Yawl. That boat uses a Real Wind engine, similar to the original Tako. It was highly appropriate many months ago, but these days most boats (including all modern Trudeaus) use Apparent Wind algorithms to power the sails. I think it makes sense to switch to an index boat that uses Apparent Wind.

I originally thought to use the Trudeau Twenty or even the Knockabout as an Index. However, after looking at the most recent numbers, I changed my mind. There are seventy-seven J-Class data laps for the 2009 course, and the J-Class Handicap ended up a perfect “1.00.”

However, I can’t recalculate the last three month’s data on the new Madaket 2010 Hotlaps course until I get more J-Class lap scores. As soon as I get a few more laps from different people (I need a total of maybe only ten more), the rest of the numbers should fall in place and I can post another updated table incorporating the modern index.

How geeky is that? 🙂

This entry was posted in PHRF, Sailing Skills. Bookmark the permalink.